Friday of Fourth Week of Lent 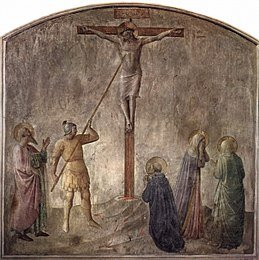 1. Through the blood of Christ the New Testament was confirmed. This chalice is the new testament in my blood (1 Corinthians 11:25). Testament has a double meaning.

(i) It may mean any kind of agreement or pact.

Now God has twice made an agreement with mankind. In one pact God promised man temporal prosperity and deliverance from temporal losses, and this pact is called the Old Testament. In another pact God promised man spiritual blessings and deliverance from spiritual losses, and this is called the New Testament, I will make a new covenant, saith the Lord, with the house of Israel and with the house of Judah: not according to the covenant which I made with their fathers, in the day that I took them by the hand to bring them out of the land of Egypt: but this shall be the covenant: I will give my law in their bosoms and I will write it in their hearts and I will be their God and they shall be my people (Jeremiah 31: 31-33).

(ii) Testament has another more restricted meaning when it signifies the arrangement of an inheritance among the different heirs, i.e., a will. Testaments, in this sense, are only confirmed by the death of the testator. As St. Paul says, For a testament is of force, after men are dead: otherwise it is as yet of no strength, whilst the testator liveth (Hebrews 9:17). God, in the beginning, made an arrangement of the eternal inheritance we were to receive, but under the figure of temporal goods. This is the Old Testament. But afterwards He made the New Testament, explicitly promising the eternal inheritance, which indeed was confirmed by the blood of the death of Christ. And therefore, Our Lord, speaking of this, says, This chalice is the new testament in my blood (1 Corinthians 11:25), as though to say, “By that which is contained in this chalice, the new testament, confirmed in the blood of Christ, is commemorated.”  (In I Corinthians 12.)

2. There are other things which make the blood of Christ precious. It is:

(i) A cleansing of our sins and uncleanness. Jesus Christ hath loved us and washed us from our sins in his own blood (Apocalypse 1: 5).

(ii) Our redemption, Thou hast redeemed us in Thy blood (Apocalypse 5:9).

(v) The opening of the gate of heaven. Having therefore brethren, a confidence in the entering into the holies by the blood of Christ (Hebrews 10:19), that is to say, a continuous prayer for us to God. For His blood daily cries for us to the Father, as again we are told, You are come to the sprinkling of blood which speaketh better than that of Abel (Hebrews 12: 22-24). The blood of Abel called for punishment. The blood of Christ calls for pardon.

(vi) Deliverance of the saints from hell. Thou also by the blood of thy testament hast sent forth thy prisoners out of the pit, wherein is no water (Zachariah 9:11).   (Sermon for Passion Sunday.)