Tuesday of Fourth Week of Lent

The Example of Christ Crucified 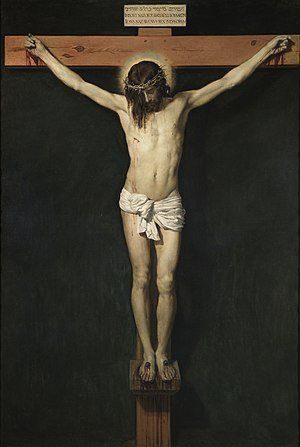 Christ assumed human nature in order to restore fallen humanity. He had therefore to suffer and to do, according to human nature, the things which could serve as a remedy against the sin of the fall.

Man’s sin consists in this that he so cleaves to bodily goods that he neglects what is good spiritually. It was therefore necessary for the Son of God to show this in the humanity he had taken, through all he did and suffered, so that men should repute temporal things, whether good or evil, as nothing, for otherwise, hindered by an exaggerated affection for them, they would be less devoted to spiritual things.

Christ therefore chose poor people for his parents, people nevertheless perfect in virtue, so that none of us should glory in the mere rank or wealth of our parents.

He led the life of a poor man, to teach us to set no store by wealth.

He lived the life of an ordinary man, without any rank, to wean men from an undue desire for honours.

Toil, thirst, hunger, the aches of the body, all these he endured, to encourage men, whom pleasures and delights attract, not to be deterred from virtue by the austerity a good life entails.

He went so far as to endure even death, lest the fear of death might at any time tempt man to abandon the truth. And lest any of us might dread to die even a shameful death for the truth, he chose to die by the most accursed death of all, by crucifixion.

That the Son of God, made man, should suffer death was also fitting for this reason, that by his example he stimulates our courage, and so makes true what St. Peter said, Christ suffered for us, leaving you an example that you should follow his steps (1 Peter 2:21).  (Contra Armen. Sarac. 7)

Christ truly suffered for us, leaving us an example in anxieties, contempts, scourgings, the cross, death itself, that we might follow in his steps. If we endure for Christ our own anxieties and sufferings, we shall also reign together with Christ in the happiness that is everlasting. St. Bernard says, ” How few are they, O Lord, who yearn to go after Thee, and yet there is no one that desireth not to come to Thee, for all men know that in Thy right hand are delights that will never fail. All desire to enjoy Thee, but not all to imitate Thee. They would willingly reign with Thee, but spare themselves from suffering with Thee. They have no desire to look for Thee, whom yet they desire to find.” (De humanitate Christi, cap. 47.)