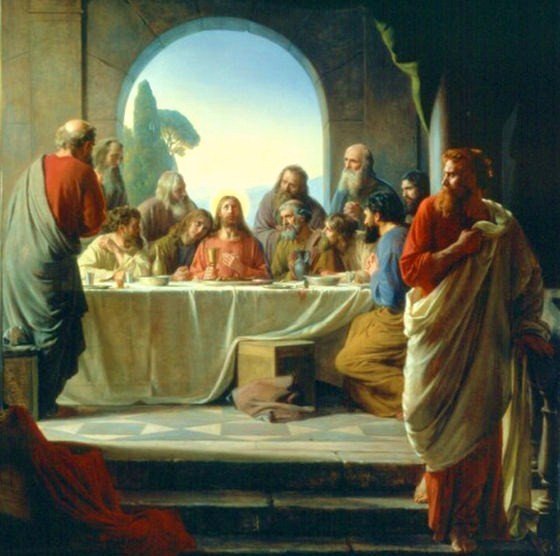 It was most fitting that the sacrament of the body of the Lord should have been instituted at the Last Supper.

1. Because of what that sacrament contains. For that which is contained in it is Christ Himself. When Christ in His natural appearance was about to depart from His disciples, He left Himself to them in a sacramental appearance, just as in the absence of the emperor there is exhibited the emperor’s image. Whence St. Eusebius says, “Since the body he had assumed was about to be taken away from their bodily sight, and was about to be carried to the stars, it was necessary that, on the day of His last supper, He should consecrate for us the sacrament of His body and blood, so that what, as a price, was offered once should, through a mystery, be worshipped unceasingly.”

2. Because without faith in the Passion there can never be salvation. Therefore it is necessary that there should be, for ever, among men something that would represent the Lord’s Passion and the chief of such representative things in the Old Testament was the Paschal Lamb. To this there succeeded in the New Testament the sacrament of the Eucharist, which is commemorative of the past Passion of the Lord as the Paschal Lamb was a foreshadowing of the Passion to come.*

And therefore was it most fitting that, on the very eve of the Passion, the old sacrament of the Paschal Lamb having been celebrated, Our Lord should institute the new sacrament.

3. Because the last words of departing friends remain longest in the memory, our love being at such moments most tenderly alert. Nothing can be greater in the realm of sacrifice than that of the body and blood of Christ, no offering can be more effective. And hence, in order that the sacrament might be held in all the more veneration, it was in His last leave-taking of the Apostles that Our Lord instituted it.

Hence St. Augustine says, “Our Saviour, to bring before our minds with all His power the heights and the depths of this sacrament, willed, ere He left the disciples to go forth to His Passion, to fix it in their hearts and their memories as His last act.”

Let us note that this sacrament has a threefold meaning:

(i) In regard to the past, it is commemorative of the Lord’s Passion, which was a true sacrifice, and because of this the sacrament is called a sacrifice.

(ii) In regard to a fact of our own time, that is, to the unity of the church and that through this sacrament mankind should be gathered together. Because of this the sacrament is called communion.

St. John Damascene says the sacrament is called communion because by means of it we communicate with Christ, and this because we hereby share in His body and in His divinity, and because by it we are communicated to and united with one another.