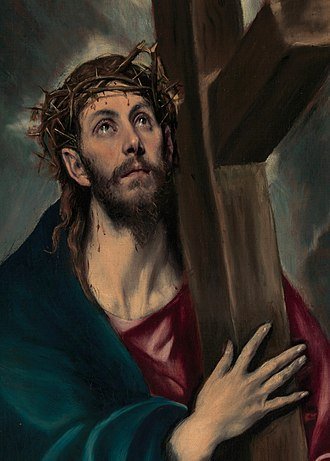 1. Grace was given to Christ not only as to a particular person, but also as far as he is the head of the Church, in order that the grace might pass over from him to his members.

And the good works Christ performed, therefore, stand in this same way in relation to him and to his members, as the good works of any other man in a state of grace stand to himself.

Now it is evident that any man who, in a state of grace, suffers for justice’ sake, merits for himself, by this very fact alone, salvation. As is said in the gospel, Blessed are they that suffer persecution for justice; sake (Matthew 5:10).

Whence Christ by his Passion merited salvation not only for himself but for all his members.

Christ, indeed, from the very instant of his conception, merited eternal salvation for us. But there still remained certain obstacles on our part, obstacles which kept us from possessing ourselves of the effect of what Christ had merited. Wherefore, in order to remove these obstacles, it behooved Christ to suffer (Luke 24:46).

Now although the love of Christ for us was not increased in the Passion, and was not greater in the Passion than before it, the Passion of Christ had a certain effect which His previous meritorious activity did not have. The Passion produced this effect not on account of any greater love shown thereby, but because it was a kind of action fitted to produce that effect, as is evident from what has been said already on the fitness of the Passion of Christ.  (Summa 3, 48, 1.)

Head and members belong to one and the same person. Now Christ is our head, according to his divinity and to the fullness of his grace which overflows upon others also. We are his members. What Christ then meritoriously acquires is not something external and foreign to us, but, by virtue of the unity of the mystical body, it overflows upon us too.

2. We should know, too, that although Christ by his death acquired merit sufficient for the whole human race, there are special things needed for the particular salvation of each individual soul, and these each soul must itself seek out. The death of Christ is, as it were, the cause of all salvation, as the sin of the first man was the cause of all condemnation. But if each individual man is to share in the effect of a universal cause, the universal cause needs to be specially applied to each individual man.

Now the effect of the sin of the first parents is transmitted to each individual through his bodily origin (i.e., through his being a bodily descendant of the first man). The effect of the death of Christ is transmitted to each man through a spiritual re-birth, a re-birth in which man is, as it were, conjoined with Christ and incorporated with him.

Therefore it is that each individual must seek to be born again through Christ, and to receive those other things in which works the power of the death of Christ.  (Contra Genesis 4:55.)