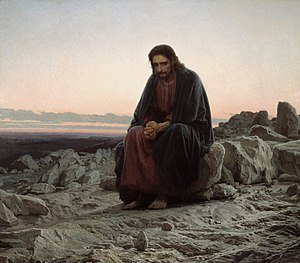 Then Jesus was led by the spirit into the desert, to be tempted by the devil.  And when he had fasted forty days and forty nights, afterwards he was hungry. —Matthew 4: 1-2

1. We fast for three reasons.

(i) To check the desires of the flesh. So, St. Paul says in fastings, in chastity (2 Corinthians 4:5), meaning that fasting is a safeguard for chastity. As St. Jerome says, “Without Ceres, and Bacchus, Venus would freeze,” as much as to say that lust loses its heat through spareness of food and drink.

(ii) That the mind may more freely raise itself to contemplation of the heights. We read in the book of Daniel that it was after a fast of three weeks that he received the revelation from God (Daniel 10:2-4).

(iii) To make satisfaction for sin. This is the reason given by the prophet Joel, Be converted to me with all your heart, in fasting and in weeping and in mourning (Joel 2:12). And here is what St. Augustine writes on the matter. “Fasting purifies the soul. It lifts up the mind, and it brings the body into subjection to the spirit. It makes the heart contrite and humble, scatters the clouds of desire, puts out the flames of lust and the true light of chastity.”

2. There is commandment laid on us to fast. For fasting helps to destroy sin, and to raise the mind to thoughts of the spiritual world. Each man is then bound, by the natural law of the matter, to fast just as much as is necessary to help him in these matters. Which is to say that fasting in general is a matter of natural law. To determine, however, when we shall fast and how, according to what suits and is of use to the Catholic body, is a matter of positive law. To state the positive law is the business of the bishops, and what is thus stated by them is called ecclesiastical fasting, in contradistinction with the natural fasting previously mentioned.

3. The times fixed for fasting by the Church are well chosen. Fasting has two objects in view:

(i) The destruction of sin, and

(ii) the lifting of the mind to higher things.

The times self-indicated for fasting are then those in which men are especially bound to free themselves from sin and to raise their minds to God in devotion. Such a time especially is that which precedes that solemnity of Easter in which baptism is administered and sin thereby destroyed, and when the burial of Our Lord is recalled, for we are buried together with Christ by baptism into death (Rom. vi. 4). Then, too, at Easter most of all, men’s minds should be lifted, through devotion to the glory of that eternity which Christ in his resurrection inaugurated.

Wherefore the Church has decreed that immediately before the solemnity of Easter we must fast, and, for a similar reason, that we must fast on the eves of the principal feasts, setting apart those days as opportune to prepare ourselves for the devout celebration of the feasts themselves. (2-2 97 I, 3, 5.)