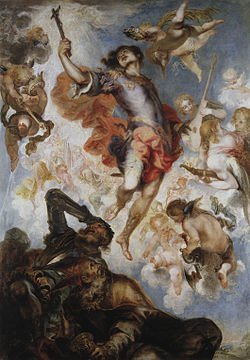 by Francisco Herrera the Younger

LEOVIGILD, King of the Visigoths, had two sons, Hermenegild and Recared, who reigned conjointly with him. All three were Arians, but Hermenegild married a zealous Catholic, the daughter of Sigebert, Ring of France, and by her holy example was converted to the faith. His father, on hearing the news, denounced him as a traitor, and marched to seize his person. Hermenegild tried to rally the Catholics of Spain in his defence, but they were too weak to make any stand, and, after a two years fruitless struggle, he surrendered on the assurance of a free pardon. When safely in the royal camp, the king had him loaded with fetters and cast into a foul dungeon at Seville. Tortures and bribes were in turn employed to shake his faith, but Hermenegild wrote to his father that he held the crown as nothing, and preferred to lose sceptre and life rather than betray the truth of God. At length, on Easter night, an Arian bishop entered his cell, and promised him his father’s pardon if he would but receive Communion at his hands. Hermenegild indignantly rejected the offer, and knelt with joy for his depth-stroke. The same night a light streaming from his cell told the Christians who were watching near that the martyr had won his crown, and was keeping his Easter with the Saints in glory.

Leovigild on his death-bed, though still an Arian, bade Recared seek out St. Leander, whom he had himself cruelly persecuted, and, following Hermenegild’s example, be received by him into the Church. Recared did so, and on his father’s death labored so earnestly for the extirpation of Arianism that he brought over the whole nation of the Visigoths to the Church. “Nor is it to be wondered,” says St. Gregory, “that he came thus to be a preacher of the true faith, seeing that he was brother of a martyr, whose merits did help him to bring so many into the lap of God’s Church.“

Reflection.—St. Hermenegild teaches us that constancy and sacrifice are the hest arguments for the Faith, and the surest way to win souls to God.

Date of birth unknown; d. 13 April, 585. Leovigild, the Arian King of the Visigoths (569-86), had two sons, Hermengild and Reccared, by his first marriage with the Catholic Princess Theodosia. Hermengild married, in 576, Ingundis, a Frankish Catholic princess, the daughter of Sigebert and Brunhilde. Led by his own inclination, and influenced by his wife as well as by the instructions of St. Leander of Seville, he entered the Catholic fold. Leovigild’s second wife, Goswintha, a fanatical Arian, hated her daughter-in-law and sought by ill-treatment to force her to abandon the Catholic Faith. Hermengild had accordingly withdrawn, with his father’s sanction, to Andalusia, and had taken his wife with him. But when Leovigild learned of his son’s conversion he summoned him back to Toledo, which command Hermengild did not obey. The fanatical Arianism of his step-mother, and his father’s severe treatment of Catholics in Spain, stirred him to take up arms in protection of his oppressed co-religionists and in defence of his own rights. At the same time he formed an alliance with the Byzantines. Leovigold took the field against his son in 582, prevailed on the Byzantines to betray Hermengild for a sum of 30,000 gold solidi, besieged the latter in Seville in 583, and captured the city after a siege of nearly two years. Hermengild sought refuge in a church at Cordova, whence he was enticed by the false promises of Leovigild, who stripped him in camp of his royal raiment and banished him to Valencia (584). His wife, Ingundis, fled with her son to Africa, where she died, after which the boy was given, by order of Emperor Mauritius, into the hands of his grandmother Brunhilde. We are not fully informed as to Hermengild’s subsequent fate.

Gregory the Great relates (Dialogi, III, 31, in P.L. LXVII, 289-93) that Leovigild sent an Arian bishop to him in his prison, on Easter Eve of 585, with a promise that he would forgive him all, provided he consented to receive Holy Communion from the hands of this bishop. But Hermengild firmly refused thus to abjure his Catholic belief, and was in consequence beheaded on Easter Day. He was later venerated as a martyr, and Sixtus V (1585), acting on the suggestion of King Philip II, extended the celebration of his feast (13 April) throughout the whole of Spain.