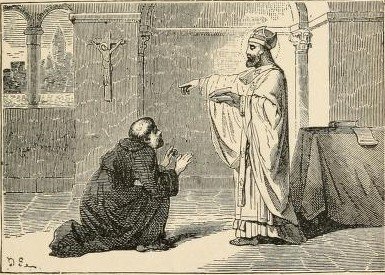 RICHARD was born, 1197, in the little town of Wyche, eight miles from Worcester, England. He and his elder brother were left orphans when young, and Richard gave up the studies which he loved, to farm his brother’s impoverished estate. His brother, in gratitude for Richard’s successful care, proposed to make over to him all his lands; but he refused both the estate and the offer of a brilliant marriage, to study for the priesthood at Oxford. In 1235 he was appointed, for his learning and piety, chancellor of that University, and afterwards, by St. Edmund of Canterbury, chancellor of his diocese. He stood by that Saint in his long contest with the king, and accompanied him into exile. After St. Edmund’s death Richard returned to England to toil as a simple curate, but was soon elected Bishop of Chichester in preference to the worthless nominee of Henry III. The king in revenge refused to recognize the election, and seized the revenues of the see. Thus Richard found himself fighting the same 1 battle in which St. Edmund had died. He went to Lyons, was there consecrated by Innocent IV. in 1245, and returning to England, in spite of his poverty and the king’s hostility, exercised fully his episcopal rights, and thoroughly reformed his see. After two years his revenues were restored. Young and old loved St. Richard. He gave all he had, and worked miracles, to feed the poor and heal the sick; but when the rights or purity of the Church were concerned he was inexorable. A priest of noble blood polluted his office by sin; Richard deprived him of his benefice, and refused the king’s petition in his favor. On the other hand, when a knight violently put a priest in prison, Richard compelled the knight to walk round the priest’s church with the same log of wood on his neck to which he had chained the priest; and when the burgesses of Lewes tore a criminal from the church and hanged him, Richard made them dig up the body from its unconsecrated grave, and bear it back to the sanctuary they had violated. Richard died in 1253, while preaching, at the Pope’s command, a crusade against the Saracens.

Reflection.—As a brother, as chancellor, and as bishop, St. Richard faithfully performed each duty of his state without a thought of his own interests. Neglect of duty is the first sign of that self-love which ends with the loss of grace.

Bishop and confessor, born about 1197 at Droitwich, Worcestershire, from which his surname is derived; died 3 April, 1253, at Dover. He was the second son of Richard and Alice de Wyche. His father died while he was still young and the family property fell into a state of great delapidation. His elder brother offered to resign the inheritance to him, but Richard refused the offer, although he undertook the management of the estate and soon restored it to a good condition. He went to Oxford, where he and two companions lived in such poverty that they had only one tunic and hooded gown between them, in which they attended lectures by turns. He then went to Paris and on his return proceeded Master of Arts. At Bologna he studied canon law, in which he acquired a great reputation and was elected Chancellor of the University of Oxford.

His learning and sanctity were so famed that Edmund Rich, Archbishop of Canterbury, and Robert Grosseteste, Bishop of Lincoln, both offered him the post of chancellor of their respective dioceses. Richard accepted the archbishop’s offer and thenceforward became St. Edmund’s intimate friend and follower. He approved the archbishop’s action in opposing the king on the question of the vacant sees, accompanied him in his exile to Pontigny, was present at Soissy when he died, and made him a model in life. Richard supplied Matthew Paris with material for his biography, and, after attending the translation of his relics to Pontigny in 1249, wrote an account of the incident in a letter published by Matthew Paris (Historia major, V, VI). Retiring to the house of the Dominicans at Orléans, Richard studied theology, was ordained priest, and, after founding a chapel in honour of St. Edmund, returned to England where he became Vicar of Deal and Rector of Charring. Soon afterwards he was induced by Boniface of Savoy, the new Archbishop of Canterbury, to resume his former office of chancellor.

In 1244 Ralph Neville, Bishop of Chichester, died; the election of Robert Passelewe, Archdeacon of Chichester, to the vacant see, was quashed by Boniface at a synod of his suffragans, held 3 June, 1244, and on his recommendation the chapter elected Richard, their choice being immediately confirmed by the archbishop. Henry III was indignant, as Robert Passelewe was a favourite, and he refused to surrender to Richard the temporalities of his see. The Saint took his case to Innocent IV, who consecrated him in person at Lyons, 5 March, 1245, and sent him back to England. But Henry was immovable. Thus homeless in his own diocese, Richard was dependent on the charity of his clergy, one of whom, Simon of Tarring, shared with him the little he possessed. At length, in 1246, Henry was induced by the threats of the pope to deliver up the temporalities. As bishop, Richard lived in great austerity, giving away most of his revenues as alms. He compiled a number of statutes which regulate in great detail the lives of the clergy, the celebration of Divine service, the administration of the sacraments, church privileges, and other matters. Every priest in the diocese was bound to obtain a copy of these statutes and bring it to the diocesan synod (Wilkins, “Concilia”, I, 688-93); in this way the standard of life among the clergy was raised considerably. For the better maintenance of his cathedral Richard instituted a yearly collection to be made in every parish of the diocese on Easter or Whit Sunday. The mendicant orders, particularly the Dominicans, received special encouragement from him.

In 1250 Richard was named as one of the collectors of the subsidy for the crusades (Bliss, “Calendar of Papal Letters”, I, 263) and two years later the king appointed him to preach the crusade in London. He made strenuous efforts to rouse enthusiasm for the cause in the Dioceses of Chichester and Canterbury, and while journeying to Dover, where he was to consecrate a new church dedicated to St. Edmund, he was taken ill. Upon reaching Dover, he went to a hospital called “Maison Dieu”, performed the consecration ceremony on 2 April, but died the next morning. His body was taken back to Chichester and buried in the cathedral. He was solemnly canonized by Urban IV in the Franciscan church at Viterbo, 1262, and on 20 Feb. a papal licence for the translation of his relics to a new shrine was given; but the unsettled state of the country prevented this until 16 June, 1276, when the translation was performed by Archbishop Kilwardby in the presence of Edward I. This shrine, which stood in the feretory behind the high altar, was rifled and destroyed at the Reformation. The much-restored altar tomb in the south transept now commonly assigned to St. Richard has no evidence to support its claim, and no relics are known to exist. The feast is celebrated on 3 April. The most accurate version of St. Richard’s will, which has been frequently printed, is that given by Blaauw in “Sussex Archaeological Collections”, I, 164-92, with a translation and valuable notes. His life was written by his confessor Ralph Bocking shortly after his canonization and another short life, compiled in the fifteenth century, was printed by Capgrave. Both these are included in the notice of St. Richard in the Bollandist “Acta Sanctorum”.