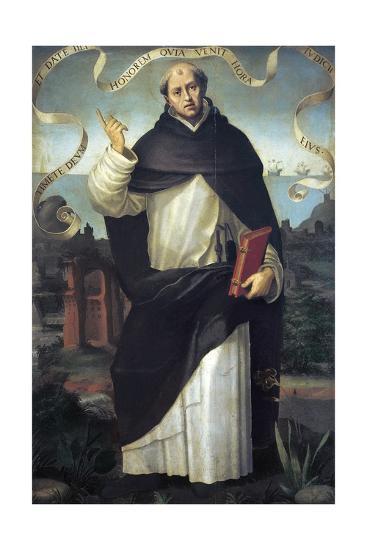 The wonderful apostle, the “Angel of the Judgment,” was born at Valencia in Spain, in 1350, and at the age of eighteen professed in the Order of St. Dominic. After a brilliant course of study he became master of sacred theology. For three years he read only the Scriptures, and knew the whole Bible by heart. He converted the Jews of Valencia, and their synagogue became a church. Grief at the great schism then afflicting the Church reduced him to the point of death; but Our Lord Himself in glory bade him go forth to convert sinners, “for My judgment is nigh.” This miraculous apostolate lasted twenty-one years. He preached throughout Europe, in the towns and villages of Spain, Switzerland, France, Italy, England, Ireland, Scotland. Everywhere tens of thousands of sinners were reformed; Jews, infidels, and heretics were converted. Stupendous miracles enforced his words. Twice each day the ” miracle bell ” summoned the sick, the blind, the lame to be cured. Sinners the most obdurate became Saints; speaking only his native Spanish, he was understood in all tongues. Processions of ten thousand penitents followed him in perfect order. Convents, orphanages, hospitals, arose in his path. Amidst all, his humility remained profound, his prayer constant. He always prepared for preaching by prayer. Once, however, when a person of high rank was to be present at his sermon he neglected prayer for study. The nobleman was not particularly struck by the discourse which had been thus carefully worked up; but coming again to hear the Saint, unknown to the latter, the second sermon made a deep impression on his soul. When St. Vincent heard of the difference, he remarked that in the first sermon it was Vincent who had preached, but in the second, Jesus Christ. He fell ill at Vannes in Brittany, and received the crown of everlasting glory in 1419.

Reflection.—“Whatever you do,” said St. Vincent, “think not of yourself, but of God.” In this spirit he preached, and God spoke by him; in this spirit, if we listen, we shall hear the voice of God.

Famous Dominican missionary, born at Valencia, 23 January, 1350; died at Vannes, Brittany, 5 April, 1419. He was descended from the younger of two brothers who were knighted for their valour in the conquest of Valencia, 1238. In 1340 Vincent’s father, William Ferrer, married Constantia Miguel, whose family had likewise been ennobled during the conquest of Valencia. Vincent was their fourth child. A brother, not unknown to history, was Boniface Ferrer, General of the Carthusians, who was employed by the antipope Benedict XIII in important diplomatic missions. Vincent was educated at Valencia, and completed his philosophy at the age of fourteen. In 1367 he entered the Dominican Order, and was sent to the house of studies at Barcelona the following year. In 1370 he taught philosophy at Lérida; one of his pupils there was Pierre Fouloup, later Grand Inquisitor of Aragon. In 1373 Vincent returned to the Dominican “Studium arabicum et hebraicum” at Barcelona. During his stay there famine was prevalent; filled with compassion for the sufferers; Vincent foretold, while preaching one day, the near approach of ships bearing wheat. His prediction was fulfilled. In 1377 he was sent to continue his studies at Toulouse, where, in his own words, “study followed prayer, and prayer succeeded study”. In 1379 Vincent was retained by Cardinal Pedro de Luna, legate of the Court of Aragon, who was endeavouring to win King Peter IV to the obedience of Avignon. The saint, thoroughly convinced of the legitimacy of the claims of the Avignon pontiffs, was one of their strongest champions. From 1385 to 1390 he taught theology in the cathedral at Valencia.

After this Vincent carried on his apostolic work while in Pedro de Luna’s suite. At Valladolid he converted a rabbi, later well known as Bishop Paul of Burgos. At Salamanca Queen Yolanda of Aragon chose him for her confessor, 1391-5. About this time he was cited before the Inquisition for preaching publicly “the Judas had done penance”, but Pedro de Luna, recently raised to the papal chair as Benedict XIII, cited the case before his tribunal and burned the papers. Benedict then called him to Avignon and appointed him confessor and Apostolic penitentiary. Notwithstanding the indifference of so many prelates in the papal Court, he laboured zealously among the people. He steadfastly refused the honours, including the cardinalate, which were offered to him. France withdrew from the obedience of Avignon in September, 1398, and the troops of Charles VI laid siege to the city. An attack of fever at this time brought Vincent to death’s door, but during an apparition of Christ accompanied by St. Dominic and St. Francis he was miraculously cured and sent to preach penance and prepare men for the coming judgment. Not until November, 1399, did Benedict allow Vincent Ferrer to begin his apostolate, furnished with full powers of a legate a latere Christi. For twenty years he traversed western Europe, preaching penance for sin and preparation for judgment. Provence was the first field of his apostolate; he was obliged to preach in squares and open places, such were the numbers that flocked to hear him. In 1401 he evangelized Dauphiny, Savoy, and the Alpine region, converting many Catharins and Waldensians. Thence he penetrated into Lombardy. While preaching at Alexandria he singled out from among the hearers a youth who was destined to evangelize Italy, Bernadine of Siena. Another chosen soul with whom Vincent came in contact while in Italy was Margaret of Savoy. During the years 1403-4 Switzerland, Savoy, and Lyons received the missionary. He was followed by an army of penitents drawn from every rank of society, who desired to remain under his guidance. Vincent was ever watchful of his disciples, and never did the breath of scandal touch this strange assemblage, which numbered at times 10,000. Genoa, Flanders, Northern France, all heard Vincent in turn. It would be difficult to understand how he could make himself understood by the many nationalities he evangelized, as he could speak only Limousin, the language of Valencia. Many of his biographers hold that he was endowed with the gift of tongues, an opinion supported by Nicholas Clemangis, a doctor of the University of Paris, who had heard him preach.

In 1408 Vincent was at Genoa consoling the plague-stricken. A meeting had been arranged there between Gregory XII and Benedict XIII in the hope of putting an end to the schism. Vincent again urged Benedict to have pity on the afflicted Church, but in vain. Disappointed, he returned to Spain. It would be difficult to overestimate the influence which he exercised in the Iberian peninsula. Castile, Aragon, Valencia, Murcia, Granada, Andalusia, and Asturias were visited in turn, and everywhere miracles marked his progress; Christians, Jews, and Moslems were all lost in admiration of the thaumaturgus. From 1408 until 1416 he worked almost continuously south of the Pyrenees. At different times in Spanish history strenuous attempts had been made to convert the Jewish people, baptism or spoliation being the alternatives offered to them. This state of affairs existed when Vincent began to work among them; multitudes were won over by his preaching. Ranzano, his first biographer, estimates the number of Jews converted at 25,000. In the Kingdom of Granada he converted thousands of Moors. Vincent was often called upon to aid his country in temporal affairs, as the counsellor of kings and at one time the arbiter of the destiny of Spain. In 1409 he was commissioned by Benedict XIII to announce to Martin of Aragon the death of his only son and heir.

After Martin’s death, the representatives of the Kingdoms of Aragon, Valencia, and Catalonia appointed Vincent one of the judges to determine the succession to the Crown. At the judgment, known as the Compromise of Caspe, he took the leading part and helped to elect Ferdinand of Castile. Vincent was one of the most resolute and faithful adherents of Benedict XIII, and by his word, sanctity, and miracles he did much to strengthen Benedict’s position. It was not until 1416, when pressed by Ferdinand, King of Aragon, that he abandoned him. On 6 January, preaching at Perpignan, he declared anew to the vast throng gathered around his pulpit that Benedict XIII was the legitimate pope, but that, since he would not resign to bring peace to the Church, Ferdinand had withdrawn his states from the obedience of Avignon. This act must have caused Vincent much sorrow, for he was deeply attached to Benedict. Nevertheless, it was thought that Vincent was the only person sufficiently esteemed to announce such a step to the Spanish races. John Dominici was more fortunate in his attempts to pave the way for reunion, when he announced to the Council of Constance the resignation of Gregory XII. Vincent did not go to the Council of Constance; he continued his apostolic journeys through France, and spent the last two years of his life in Brittany, where consciences without number were reformed and instructed in a Christian way of life.

Vincent felt that he was the messenger of penance sent to prepare men for the judgment. For twenty years he traversed Western Europe preaching penance and awakening the dormant consciences of sinners by his wondrous eloquence. His austere life was but the living expression of his doctrine. The floor was his usual bed; perpetually fasting, he arose at two in the morning to chant the Office, celebrating Mass daily, afterwards preaching, sometimes three hours, and frequently working miracles. After his midday meal he would tend the sick children; at eight o’clock he prepared his sermon for the following day. He usually travelled on foot, poorly clad. Among St. Vincent’s writings are: “De suppositionibus dialecticis” (The Development of Logic); “De natura universalis” (The Natural Universe); “De monderno ecclesiae schismate” (On the Modern Schism of the Church), a defence of the Avignon pontiffs; and “De vita spirituali” (The Spiritual Life). His “Sermons” were published at Antwerp (1570), Augsburg (1729), and Lyons (1816); and his complete works at Valence (1591). He was canonized by Calixtus III at the Dominican Church of Santa Maria Sopra Minerva, Rome, 3 June, 1455.