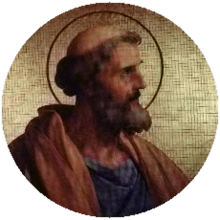 ST. CELESTINE was a native of Rome, and upon the demise of Pope Boniface he was chosen to succeed him, in September 422, by the wonderful consent of the whole city. His first official act was to confirm the condemnation of an African bishop who had been convicted of grave crimes. He wrote also to the bishops of the provinces of Vienne and Narbonne in Gaul, to correct several abuses, and ordered, among other things, that absolution or reconciliation should never be refused to any dying sinner who sincerely asked it; for repentance depends not so much on time as on the heart. He assembled a synod at Rome in 430, in which the writings of Nestorius were examined, and his blasphemies in maintaining in Christ a divine and a human person were condemned. The Pope pronounced sentence of excommunication against Nestorius, and deposed him. Being informed that Agricola, the son of a British bishop called Saverianus, who had been married before he was raised to the priesthood, had spread the seeds of the Pelagian heresy in Britain, St. Celestine sent thither St. Germanus of Auxerre, whose zeal and conduct happily prevented the threatening danger. He also sent St. Palladius, a Roman, to preach the Faith to the Scots, both in North Britain and in Ireland, and many authors of the life of St. Patrick say that apostle likewise received his commission to preach to the Irish from St. Celestine, in 431. This holy Pope died on the 1st of August, in 432, having reigned almost ten years.

Reflection.—Vigilance is truly needful to those to whom the care of souls has been confided. “Blessed are the servants whom the Lord at His coming shall find watching.”

Nothing is known of his early history except that he was a Roman and that his father’s name was Priscus. He is said to have lived for a time at Milan with St. Ambrose; the first notice, however, concerning him that is known is in a document of St. Innocent I, in the year 416, where he is spoken of as Celestine the Deacon. In 418 St. Augustine wrote to him (Epist., lxii) in very reverential language. He succeeded St. Boniface I as pope, 10 Sept., 422 (according to Tillemont, though the Bollandists say 3 Nov.), and died 26 July, 432, having reigned nine years, ten months, and sixteen days. In spite of the troublous times at Rome, he was elected without any opposition, as is learned from a letter of St. Augustine (Epist., cclxi), written to him shortly after his elevation, in which the great doctor begs his assistance in composing his difficulties with Antonius, Bishop of Fessula in Africa. A strong friendship seems to have existed between Celestine and Augustine, and after the death of the latter in 430, Celestine wrote a long letter to the bishops of Gaul on the sanctity, learning and zeal of the holy doctor, and forbade all attacks upon his memory on the part of the Semipelagians, who under the leadership of the famous ascetic, John Cassian, were then beginning to gain influence. Though his lot was cast in stormy times, for the Manichæans, Donatists, Noviatians, and Pelagians were troubling the peace of the Church, while the barbarian hordes were beginning their inroads into the heart of the empire, Celestine’s firm but gentle character enabled him to meet successfully all the exigencies of his position. We see him everywhere upholding the rights of the Church and the dignity of his office. In this he was aided by Placidia, who, in the name of her youthful son, Valentinian III, banished from Rome the Manichæans and other heretics who were disturbing the peace. Celestine not only excluded Coelestius, the companion and chief disciple of Pelagius, from Italy, but procured the further condemnation of the sect from the Council of Ephesus, while through his instrumentality St. Germanus of Auxerre and St. Lupus of Troyes, who had been sent to Britain in 429, the native land of Pelagius, by the Gallic bishops, succeeded in extirpating the error from its native soil.

A firm upholder of the ancient canons, we find Celestine writing to the bishops of Illyria, bidding them observe the canons and their old allegiance to the Bishop of Thessalonica, the papal vicar, without whom they are not to consecrate any bishop or hold any council. He also writes to the Bishops of Vienne and Narbonne, whom he warns to keep the ancient canons, and, in accordance with the warning of his predecessor, to resist the pretensions of the See of Arles. Moreover they must not refuse to admit to penance those who desire it at the moment of death; bishops, too, must not dress as monks, and severe action is to be taken against a certain Daniel, a monk from the Orient who had been the cause of serious disorders in the Church of Gaul. To the Bishops of Apulia and Calabria he writes that the clergy must not remain ignorant of the canons, neither are the laity to be advanced to the episcopate over the heads of the clergy, nor is the popular will, no matter how strong, to be humoured in this matter — populus docendus non sequendus. Moreover he threatens severe penalties for future transgressors. In upholding the rights of the Roman Church to hear and decide appeals from all quarters, he came for a time into conflict with the great Church of Africa (see Apiarius). The African bishops, however, through manifesting some warmth, never called into question the Divine supremacy of the Holy See, their very language and actions expressed its fullest recognition; their complaints were directed rather against the sometimes indiscreet use of the papal prerogative. The last years of the pontificate of Celestine were taken up with the struggle in the East over the heresy of Nestorius (see Nestorius; Cyril of Alexandria; Ephesus, Council of). Nestorius who had become Bishop of Constantinople in 428 at first gave great satisfaction, as we learn from a letter addressed to him by Celestine. He soon aroused suspicions of his orthodoxy by receiving kindly the Pelagians banished from Rome by the pope, and shortly after, rumours of his heretical teaching concerning the twofold personality of Christ reaching Rome, Celestine commissioned Cyril, Bishop of Alexandria, to investigate and make a report. Cyril having found Nestorius openly professing his heresy sent a full account to Celestine, who in a Roman synod (430), having solemnly condemned the errors of Nestorius, now ordered Cyril in his name to proceed against Nestorius, who was to be excommunicated and deposed unless within ten days he should have made in writing a solemn retractation of his errors. In letters written the same day to Nestorius, to the clergy and people of Constantinople, and to John of Antioch, Juvenal of Jerusalem, Rufus of Thessalonica, and Flavian of Philippi, Celestine announces the sentence passed upon Nestorius and the commission given to Cyril to execute it. At the same time he restored all who had been excommunicated or deprived by Nestorius. Cyril forwarded the papal sentence and his own anathema to Nestorius. The emperor now summoned a general council to meet at Ephesus. To this council Celestine sent as legates, Arcadius, and Projectus, bishops, and Philippus, a priest, who were to act in conjunction with Cyril. However, they were not to mix in discussion but were to judge the opinions of the others. Celestine in all his letters assumes his own decision as final, Cyril and the council, “compelled by the sacred canons and the letters of Our Most Holy Father, Celestine, Bishop of the Roman Church.”

The last official act of Celestine, the sending of St. Patrick to Ireland, perhaps surpasses all the rest in its far-reaching consequences for good. He had already sent (431) Palladius as bishop to the “Scots [i.e. Irish] believing in Christ.” But Palladius son abandoned Ireland and died the year following in Britain. St. Patrick, who had previously been refused, now received the long-coveted commission only a few days before the death of Celestine, who thus becomes a sharer in the conversion of the race that in the next few centuries was to accomplish such vast works by its countless missionaries and scholars in the conversion and civilization of the barbarian world. In the local affairs of the Roman Church, Celestine manifested great zeal. He restored and embellished the church of Santa Maria in Trastevere, which had suffered from the Gothic pillage of Rome, also the church of St. Sabina, besides decorating the Cemetery of St. Priscilla with paintings of the Council Ephesus. The precise date of his death is uncertain. His feast is kept in the Latin Church on 6 April, the day on which his body was placed in the Catacombs of St. Priscilla whence it was transferred in 820 by Pope St. Paschal I to the church of Sta Prassede, though the cathedral of Mantua likewise claims his relics. In the Greek Church where he is highly honoured for his condemnation of Nestorius, his feast falls on 8 April.

The extant writings of St. Celestine consist of sixteen letters, the contents of many of which have been indicated above, and a fragment of a discourse on Nestorianism delivered in the Roman Synod of 430. The “Capitula Coelestini”, the ten decisions on the subject of grace which have played such a part in the history of Augustinianism, are no longer attributed to his authorship. For centuries they were affixed as an integral part to his letter to the Bishops of Gaul, but at present are considered as most probably the work of St. Prosper of Aquitaine. Anastasius Bibliothecarius attributes to him several other constitutions but with little authority. Doubtful also is the statement of the “Liber Pontificalis” that Celestine added the Introit to the Mass.