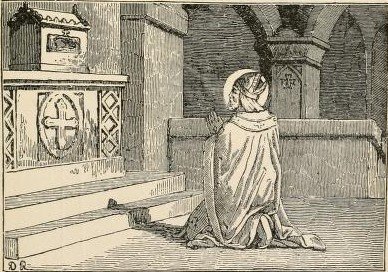 ST. PERPETUUS was the eighth Bishop of Tours from St. Gatian, and governed that see above thirty years, from 461 to 491, when he died on the 8th of April. During all that time he labored by zealous sermons, many synods, and wholesome regulations, to lead souls to virtue. St. Perpetuus had a great veneration for the Saints, and respect for their relics, adorned their shrines, and enriched their churches. As there was a continual succession of miracles at the tomb of St. Martin, Perpetuus finding the church built by St. Bricius too small for the concourse of people that resorted thither, directed its enlargement. When the building was finished, the good bishop solemnized the dedication of this new church, and performed the translation of the body of St. Martin, on the 4th of July in 473. Our Saint made and signed his last will, which is still extant, on the 1st of March, 475, fifteen years before his death. By it he remits all debts that were owing to him; and having bequeathed to his church his library and several farms, and settled a fund for the maintenance of lamps, and the purchase of sacred vessels, as occasion might require, he declares the poor his heirs. He adds most pathetic exhortations to concord and piety; and bequeaths to his sister, Fidia Julia Perpetua, a little gold cross, with relics; he leaves legacies to several other friends and priests, begging of each a remembrance of him in their prayers. His ancient epitaph equals him to the great St. Martin.

Reflection.—The smart of poverty, says a spiritual writer, is allayed even more by one word of true sympathy than by the alms we give. Alms coldly and harshly given irritate rather than soothe. Even when we cannot give, words of kindness are as a precious balm; and when we can give, they are the salt and seasoning of our alms.

Eighth Bishop of Tours, died 1 January, or 8 December, 490, or 8 April, 491. He was a member of the illustrious family which produced St. Eustachius, who had been his predecessor, and also St. Volusianus, who became his successor in the same episcopal see. Appointed about 460, he guided the Church of Tours for thirty years, and it is apparent, from what little information we have, that during his administration Christianity was considerably developed and consolidated in Touraine. Shortly after his elevation, St. Perpetuus presided at a council in which eight bishops who were reunited in Tours on the Feast of St. Martin had participated, and at this assembly an important rule was promulgated relative to ecclesiastical discipline. He maintained a careful surveillance over the conduct of the clergy of his diocese, and mention is made of priests who were removed from their office because they had proved unworthy. He built monasteries and various churches, but above all he desired to replace by a beautiful basilica (470) the little chapel that Saint Britius had constructed, to protect the tomb of St. Martin. The will of St. Perpetuus was published for the first time in 1661 by Dom Luc d’Achery in his “Spicilegium”. This curious historical monument belonging to the end of the fifth century gives us an excellent idea of the sanctity of its author.