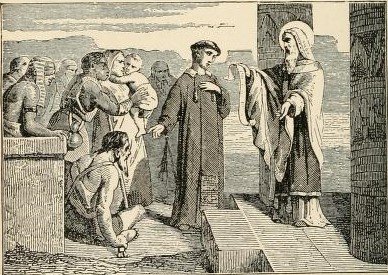 ST. JOHN was married, but when his wife and two children died he considered it a call from God to lead a perfect life. He began to give away all he possessed in alms, and became known throughout the East as the Almoner. He was appointed Patriarch of Alexandria; but before he would take possession of his see he told his servants to go over the town and bring him a list of his lords—meaning the poor. They brought word that there were seventy-five hundred of them, and these he undertook to feed every day. On Wednesday and Friday in every week he sat on a bench before the church, to hear the complaints of the needy and aggrieved; nor would he permit his servants to taste food until their wrongs were redressed. The fear of death was ever before him, and he never spoke an idle word. He turned those out of church whom he saw talking, and forbade all detractors to enter his house. He left seventy churches in Alexandria, where he had found but seven. A merchant received from St. John five pounds weight of gold to buy merchandise. Having suffered shipwreck and lost all, he had again recourse to John, who said, “Some of your merchandise was ill-gotten,” and gave him ten pounds more; but the next voyage he lost ship as well as goods. John then said, “The ship was wrongfully acquired. Take fifteen pounds of gold, buy corn with it, and put it on one of my ships.” This time the merchant was carried by the winds without his own knowledge to England, where there was a famine; and he sold the corn for its weight in tin, and on his return he found the tin changed to finest silver. St. John died in Cyprus, his native place, about the year 616.

Reflection.—What sacrifices can we make for the poor which will seem enough, when we reflect that mercy to them is our only means of repaying Jesus Christ, Who sacrificed His life for us?

Patriarch of Alexandria (606-16), born at Amathus in Cyprus about 550; died there, 616. He was the son of one Epiphanius, governor of Cyprus, and was of noble descent; in early life he was married and had children, but they and his wife soon died, whereupon he entered the religious life.

On the death of the Patriarch Theodorus, the Alexandrians besought Emperor Phocas to appoint John his successor, which was accordingly done. In his youth John had had a vision of a beautiful maiden with a garland of olives on her head, who said that she was Compassion, the eldest daughter of the Great King. This had evidently made a deep impression on John’s mind, and, now that he had the opportunity of exercising benevolence on a large scale, he soon became widely known all over the East for his munificent liberality towards the poor. One of the first steps he took was to make a list of several thousand needy persons, whom he took under his especial care. He always referred to the poor as his “lords and masters”, because of their mighty influence at the Court of the Most High. He assisted people of every class who were in need. A shipwrecked merchant was thus helped three times, on the first two occasions apparently without doing him much good; the third time however, John fitted him out with a ship and a cargo of wheat, and by favourable winds he was taken as far as Britain, where, as there was a shortage of wheat, he obtained his own price. Another person, who was not really in need, applied for alms and was detected by the officers of the palace; but John merely said “Give unto him; he may be Our Lord in disguise.” He visited the hospitals three times every week, and he freed a great many slaves. He was a reformer who attacked simony, and fought heresy by means of improvements in religious education. He also reorganized the system of weights and measures for the sake of the poor, and put a stop to corruption among the officials. He increased the number of churches in Alexandria from seven to seventy.

John is said to have devoted the entire revenues of his see to the alleviation of those in need. A rich man presented him with a magnificent bed covering; he accepted it for one night, but then sold it, and disposed of the money in alms. The rich man “bought in” the article, and again presented it to John, with the same result. This was repeated several times; but John drily remarked: “We will see who tires first.” It was not John. Another instance of his piety was that he caused his own grave to be dug, but only partly so, and appointed a servant to come before him on all state occasions and say “My Lord, your tomb is unfinished; pray give orders for its completion, for you know not the hour when death may seize you.” When the Persians sacked Jerusalem in 614, John sent large supplies of food, wine, and money to the fleeing Christians. But eventually the Persians occupied Alexandria, and John himself in his old age was forced to flee to his native country, where he died.

His body was brought to Constantinople, thence to Ofen by King Matthias Corvinus of Hungary; thence in 1530 to Toll near Presburg, and finally in 1632 to Presburg cathedral. He was the original patron saint of the Hospitallers, and was commemorated by the Greeks on 12 Nov. His life, written by Leontius of Neapolis, in Cyprus, was translated into Latin by Anastasius the Librarian in the ninth century and was referred to at the Seventh General Council.