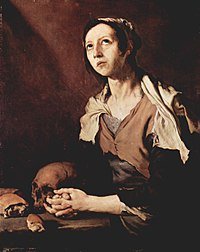 AT the tender age of twelve, Mary left her father’s house that she might sin without restraint, and for seventeen years she lived in shame at Alexandria. Then she accompanied a pilgrimage to Jerusalem, and entangled many in grievous sin. She was in that city on the Feast of the Exaltation of the Holy Cross, and went with the crowd to the church which contained the precious wood. The rest entered and adored; but Mary was invisibly held back. In that instant her misery and pollution burst upon her. Turning to the Immaculate Mother, whose picture faced her in the porch, she vowed thenceforth to do penance if she might enter and stand like Magdalene beside the Cross. Then she entered in. As she knelt before Our Lady on leaving the church, a voice came to her which said, “Pass over Jordan, and thou shalt find rest.” She went into the wilderness, and there, in 420, forty-seven years after, the Abbot Zosimus met her. She told him that for seventeen years the old songs and scenes had haunted her; ever since, she had had perfect peace. At her request he brought her on Holy Thursday the sacred body of Christ. She bade him return again after a year, and this time he found her corpse upon the sand, with an inscription sayings “Bury here the body of Mary the sinner.”

Reflection.—Blessed John Colombini was converted to God by reading St. Mary’s life. Let us, too, learn from her not to be content with confessing and lamenting our sins, but to fly from what leads us to commit them.

Born probably about 344; died about 421. At the early age of twelve Mary left her home and came to Alexandria, where for upwards of seventeen years she led a life of public prostitution. At the end of that time, on the occasion of a pilgrimage to Jerusalem for the Feast of the Exaltation of the Holy Cross, she embarked for Palestine, not however with the intention of making the pilgrimage, but in the hope that life on board ship would afford her new and abundant opportunities of gratifying an insatiable lust. Arrived in Jerusalem she persisted in her shameless life, and on the Feast of the Exaltation of the Cross joined the crowds towards the church where the sacred relic was venerated, hoping to meet in the gathering some new victims whom she might allure into sin. And now came the turning-point in her career. When she reached the church door, she suddenly felt herself repelled by some secret force, and having vainly attempted three or four times to enter, she retired to a corner of the churchyard, and was struck with remorse for her wicked life, which she recognized as the cause of her exclusion from the church. Bursting into bitter tears and beating her breast, she began to bewail her sins. Just then her eyes fell upon a statue of the Blessed Virgin above the spot where she was standing, and in deep faith and humility of heart she besought Our Lady for help, and permission to enter the church and venerate the sacred wood on which Jesus had suffered, promising that if her request were granted, she would then renounce forever the world and its ways, and forthwith depart whithersoever Our Lady might lead her. Encouraged by prayer and counting on the mercy of the Mother of God, she once more approached the door of the church, and this time succeeded in entering without the slightest difficulty. Having adored the Holy Cross and kissed the pavement of the church, she returned to Our Lady’s statue, and while praying there for guidance as to her future course, she seemed to hear a voice from afar telling her that if she crossed the Jordan, she would find rest. That same evening Mary reached the Jordan and received Holy Communion in a church dedicated to the Baptist, and the day following crossed the river and wandered eastward into the desert that stretches towards Arabia.

Here she had lived absolutely alone for forty-seven years, subsisting apparently on herbs, when a priest and monk, named Zosimus, who after the custom of his brethren had come out from his monastery to spend Lent in the desert, met her and learned from her own lips the strange and romantic story of her life. As soon as they met, she called Zosimus by his name and recognized him as a priest. After they had conversed and prayed together, she begged Zosimus to promise to meet her at the Jordan on Holy Thursday evening of the following year and bring with him the Blessed Sacrament. When the appointed evening arrived, Zosimus, we are told, put into a small chalice a portion of the undefiled Body and the precious Blood of Our Lord Jesus Christ (P.L. LXXIII, 686; “Mittens in modico calice intemerati corporis portionem et pretiosi sanguinis D.N.J.C.” But the reference to both species is less clear in Acta SS., IX, 82: “Accipiens parvum poculum intemerati corporis ac venerandi sanguinis Christi Dei nostri“), and came to the spot that had been indicated. After some time Mary appeared on the eastern bank of the river, and having made the sign of the cross, walked upon the waters to the western side. Having received Holy Communion, she raised her hands towards heaven, and cried aloud in the words of Simeon: “Now thou dost dismiss thy servant, O Lord, according to thy word in peace, because my eyes have seen thy salvation”. She then charged Zosimus to come in the course of a year to the spot where he had first met her in the desert, adding that he would find her then in what condition God might ordain. He came, but only to find the poor saint’s corpse, and written beside it on the ground a request that he should bury her, and a statement that she had died a year before, on the very night on which he had given her Holy Communion, far away by the Jordan’s banks. Aided, we are told, by a lion, he prepared her grave and buried her, and having commended himself and the Church to her prayers, he returned to his monastery, where now for the first time he recounted the wondrous story of her life.

The saint’s life was written not very long after her death by one who states that he learned the details from the monks of the monastery to which Zosimus had belonged. Many authorities mention St. Sophronius, who became Patriarch of Jerusalem in 635, as the author; but as the Bollandists give good reasons for believing that the Life was written before 500, we may conclude that it is from some other hand. The date of the saint is somewhat uncertain. The Bollandists place her death on 1 April, 421, while many other authorities put it a century later. The Greek Church celebrates her feast on 1 April, while the Roman Martyrology assigns it to 2 April, and the Roman Calendar to 3 April. The Greek date is more likely to be correct; the others may be due to the fact that on those days portions of her relics reached the West. Relics of the saint are venerated at Rome, Naples, Cremona, Antwerp, and some other places.