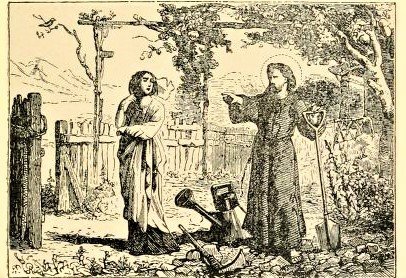 SERENUS was by birth a Grecian. He quitted his estate, friends, and country to serve God in celibacy, penance, and prayer. With this design he bought a garden in Sirmium in Pannonia, which he cultivated with his own hands, and lived on the fruits and herbs it produced. One day there came thither a woman, with her two daughters. Serenus, seeing them come up, advised them to withdraw, and to conduct themselves in future as decency required in persons of their sex and condition. [In that time it was not customary or proper for a woman to be out of doors without a male chaperone.] The woman, stung at our Saint’s charitable remonstrance, retired in confusion, but resolved on revenging the supposed affront. She accordingly wrote to her husband that Serenus had insulted her. He, on receiving her letter, went to the emperor to demand justice, whereupon the emperor gave him a letter to the governor of the province to enable him to obtain satisfaction. The governor ordered Serenus to be immediately brought before him. Serenus, on hearing the charge, answered, “I remember that, some time ago, a lady came into my garden at an unseasonable hour, and I own I took the liberty to tell her it was against decency for one of her sex and quality to be abroad at such an hour.” This plea of Serenus having put the officer to the blush for his wife’s conduct, he dropped his prosecution. But the governor, suspecting by this answer that Serenus might be a Christian, began to question him, saying, “Who are you, and what is your religion?” Serenus, without hesitating one moment, answered, “I am a Christian. It seemed a while ago as if God rejected me as a stone unfit to enter His building, but He has the goodness to take me now to be placed in it; I am ready to suffer all things for His name, that I may have a part in His kingdom with His Saints” The governor, hearing this, burst into rage and said, “Since you sought to elude by flight the emperor’s edicts, and have positively refused to sacrifice to the gods, I condemn you for these crimes to lose your head.” The sentence was no sooner pronounced than the Saint was carried off and beheaded, on the 23rd of February, in 307.

Reflection.—The garden affords a beautiful emblem of a Christian’s continual progress in the path of virtue. Plants always mount upwards, and never stop in their growth till they have attained to that maturity which the Author of nature has prescribed. So in a Christian, everything ought to carry him toward that perfection which the sanctity of his state requires; and every desire of his soul, every action of his life should be a step advancing to this in a direct line.