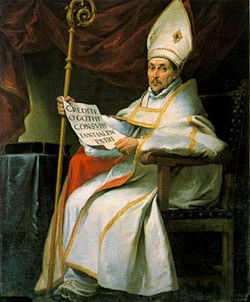 ST. LEANDER was born of an illustrious family at Carthagena in Spain. He was the eldest of five brothers, several of whom are numbered among the Saints. He entered into a monastery very young, where he lived many years and attained to an eminent degree of virtue and sacred learning. These qualities occasioned his being promoted to the see of Seville; but his change of condition made little or no alteration in his method of life, though it brought on him a great increase of care and solicitude. Spain at that time was in possession of the Visigoths. These Goths, being infected with Arianism, established this heresy wherever they came; so that when St. Leander was made bishop it had reigned in Spain a hundred years. This was his great affliction; however, by his prayers to God, and by his most zealous and unwearied endeavors, he became the happy instrument of the conversion of that nation to the Catholic faith. Having converted, among others, Hermenegild, the king’s eldest son and heir apparent, Leander was banished by King Leovigild. This pious prince was put to death by his unnatural father, the year following, for refusing to receive Communion from the hands of an Arian bishop. But, touched with remorse not long after, the king recalled our Saint; and falling sick and finding himself past hopes of recovery, he sent for St. Leander, and recommended to him his son Recared. This son, by listening to St. Leander, soon became a Catholic, and finally converted the whole nation of the Visigoths. He was no less successful with respect to the Suevi, a people of Spain, whom his father Leovigild had perverted.

St. Leander was no less zealous in the reformation of manners than in restoring the purity of faith; and he planted the seeds of that zeal and fervor which afterwards produced so many martyrs and Saints. This holy doctor of Spain died about the year 596, on the 27th of February, as Mabillon proves from his epitaph. The Church of Seville has been a metropolitan see ever since the third. century. The cathedral is the most magnificent, both as to structure and ornament, of any in all Spain.