February 5: The Martyrs of Japan

The Martyrs of Japan 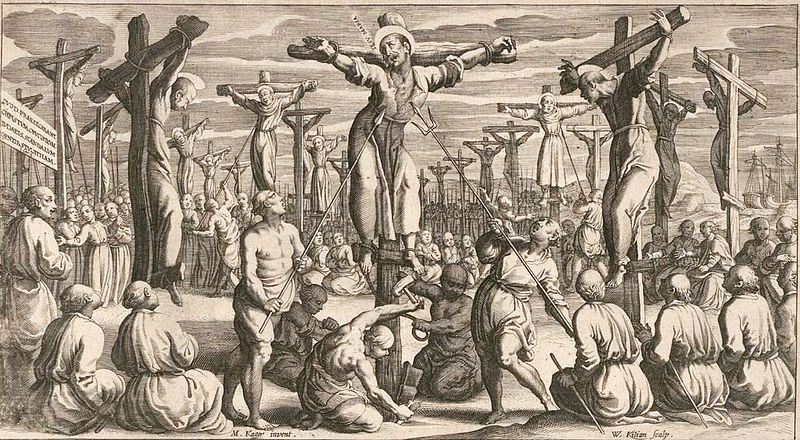 The 26 Martyrs of Japan at Nagasaki

ABOUT forty years after St. Francis Xavier’s death, a persecution broke out in Japan, and all Christian rites were forbidden under pain of death. A confraternity of martyrs was at once formed, the object of which was to die for Christ. Even the little children joined it. Peter, a Christian child six years old, was awakened early and told that he was to be beheaded, together with his father. Strong in grace, he expressed his joy at the news, dressed himself in his gayest clothing, and took the hand of the soldier who was to lead him to death. The headless trunk of his father first met his view; calmly kneeling down, he prayed beside the corpse, and, loosening his collar, prepared his neck for the stroke. Moved by this touching scene, the executioner threw down his sabre and fled. None but a brutal slave could be found for the murderous task; with unskilled and trembling hand he hacked the child to pieces, who at last died without uttering a single cry.

Christians were branded with the cross, or all but buried alive, while the head and arms were slowly sawn off with blunt weapons. The least shudder under their anguish was interpreted it into apostasy. The obstinate were put to the most cruel deaths, but the survivors only envied them. Five noblemen were escorted to the stake by 40,000 Christians with flowers and lights, singing the litanies of Our Lady as they went. In the great martyrdom, at which thousands also assisted, the martyrs sent up a flood of melody from the fire, which only died away as one after another went to sing the new song in heaven. Later on, a more awful doom was invented. The victims were lowered into a sulfurous chasm, called the “mouth of hell,” near which no bird or beast could live. The chief of these, Paul Wiborg, whose family had been already massacred for the faith, was thrice let down; thrice he cried, with a loud voice, “Eternal praise be to the ever-adorable Sacrament of the Altar.” The third time he went to his reward.

Reflection.—If mere children face torture and death with joy for Christ, can we begrudge the slight penance He asks us to bear?