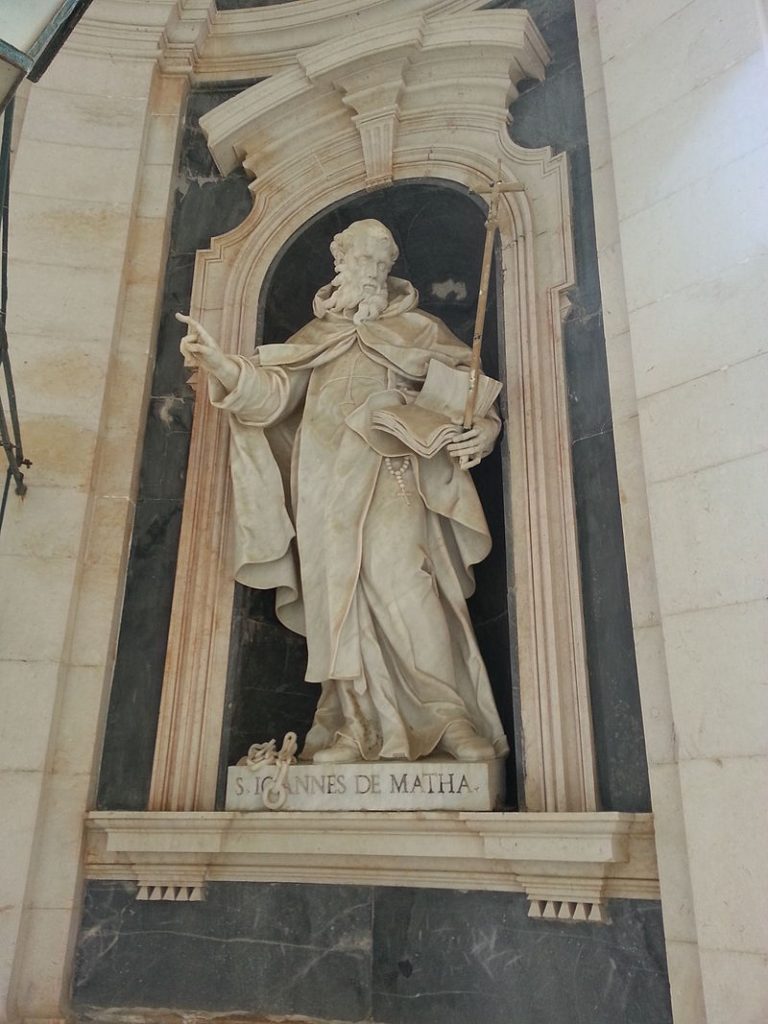 THE life of St. John of Matha was one long course of self-sacrifice for the glory of God and the good of his neighbor. As a child, his chief delight was serving the poor; and he often told them he had come into the world for no other end but to wash their feet. He studied at Paris with such distinction that his professors advised him to become a priest, in order that his talents might render greater service to others; and, for this end, John gladly sacrificed his high rank and other worldly advantages. At his first Mass an angel appeared, clad in white, with a red and blue cross on his breast, and his hands reposing on the heads of a Christian and a Moorish captive.

To ascertain what this signified, John repaired to St. Felix of Valois, a holy hermit living near Meaux, under whose direction he led a life of extreme penance. The angel again appeared, and they then set out for Rome, to learn the will of God from the lips of the Sovereign Pontiff, who told them to devote themselves to the redemption of captives. For this purpose they founded the Order of the Holy Trinity. The religious fasted every day, and gathering alms throughout Europe took them to Barbary, to redeem the Christian slaves. They devoted themselves also to the sick and prisoners in all countries. The charity of St. John in devoting his life to the redemption of captives was visibly blessed by God. On his second return from Tunis he brought back one hundred and twenty liberated slaves. But the Moors attacked him at sea, overpowered his vessel, and doomed it to destruction, with all on board, by taking away the rudder and sails, and leaving it to the mercy of the winds. St. John tied his cloak to the mast, and prayed, saying, “Let God arise, and let His enemies be scattered. O Lord, Thou wilt save the humble, and wilt bring down the eyes of the proud.” Suddenly the wind filled the small sail, and, without guidance, carried the ship safely in a few days to Ostia, the port of Rome, three hundred leagues from Tunis. Worn out by his heroic labors, John died in 1213, at the age of fifty-three.

Reflection.—Let us never forget that our blessed Lord, bade us love our neighbor not only as ourselves, but as He loved us, Who afterwards sacrificed Himself for us.