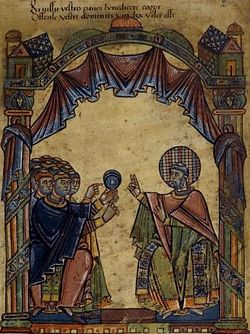 at the Third Council of Orleans

ST. ALBINUS was of an ancient and noble family in Brittany, and from his childhood was fervent in every exercise of piety. He ardently sighed after the happiness which a devout soul finds in being perfectly disengaged from all earthly things. Having embraced the monastic state at Tintillant, near Augers, he shone a perfect model of virtue, living as if in all things he had been without any will of his own; and his soul seemed so perfectly governed by the spirit of Christ as to live only for Him.

At the age of thirty-five years he was chosen abbot, in 504, and twenty-five years afterwards Bishop of Angers. He everywhere restored discipline, being inflamed with a holy zeal for the honor of God. His dignity seemed to make no alteration either in his mortifications or in the constant recollection of his soul. Honored by all the world, even by kings, he was never affected with vanity. Powerful in works and miracles, he looked upon himself as the most unworthy and most unprofitable among the servants of God, and had no other ambition than to appear such in the eyes of others as he was in those of his own humility.

In the third Council of Orleans, in 538, he procured the thirtieth canon of the Council of Epaone to be revived, by which those are declared excommunicated who presume to contract incestuous marriages in the first or second degree of consanguinity or affinity. He died on the 1st of March, in 549.

Reflection.—With whatever virtues a man may be endowed, he will discover, if he considers himself attentively, a sufficient depth of misery to afford cause for deep humility; but Jesus Christ says, “He that humbleth himself shall be exalted.”