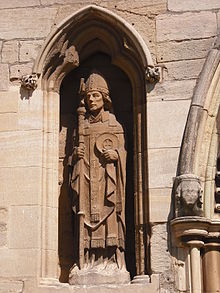 statue at his church in Grantham, Lincolnshire.

His father was an officer in the armies of King Dagobert, and the Saint spent some years in the court of King Clotaire III. and of his mother, St. Bathildes, but occupied his heart only, on God, despising worldly greatness as empty and dangerous, and daily advancing in virtue. His estate of Maurilly he bestowed on the Abbey of Fontenelle, or St. Vandrille, in Normandy. He was chosen and consecrated Archbishop of Sens in 682, which diocese he governed two years and a half with great zeal and sanctity. A tender compassion for the blindness of the idolaters of Friesland, and the example of the English zealous preachers in those parts, moved him to resign his bishopric, with proper advice, and after a retreat at Fontenelle to enter Friesland in quality of a poor missionary priest. He baptized great multitudes, among them a son of King Radbod, and drew the people from the barbarous custom of sacrificing men to idols. On a certain occasion, one Ovon having been selected as a victim of a sacrifice to the heathen gods, St. Wulfran earnestly begged his life of King Radbod; but the people ran tumultuously to the palace, and would not suffer what they called a sacrilege. After many words they consented, but on condition that Wulfran’s God should save Ovon’s life. The Saint betook himself to prayer; the man, after hanging on the gibbet two hours, and being left for dead, fell to the ground by the breaking of the cord; being found alive he was given to the Saint, and became a monk and priest at Fontenelle. Wulfran also miraculously rescued two children from being drowned in honor of the idols. Radbod, who had been an  eye-witness to this last miracle, promised to become a Christian; but as he was going to step into the baptismal font he asked where the great number of his ancestors and nobles were in the next world. The Saint replied that hell is the portion of all who die guilty of idolatry; at which the prince refused to be baptized, saying he would go with the greater number. This tyrant sent afterwards to St. Willibrord to treat with him about his conversion, but before the arrival of the Saint was found dead. St. Wulfran retired to Fontenelle that he might prepare himself for death, and expired there on the 20th of April, 720.

Reflection.—In every age the Catholic Church is a missionary church. She has received the world for her inheritance, and in our own days many missioners have watered with their blood the lands in which they labored. Help the propagation of the faith by alms, and above all by prayers. You will quicken your own faith and gain a part in the merits of the glorious apostolate.

Bishop of Sens, missionary in Frisi, born at Milly near Fontainebleau, probably during the reign of Clovis II (638-56); died 20 March, before 704, in which year a translation of his body took place (Duchesne, “Fastes épiscopaux de l’ancienne Gaule”, II, Paris, 1900, 413). His father Fulbert stood high in the esteem of Dagobert I and Clovis II. Wulfram received a good education, and was ordained priest. He intended to spend a secluded life but was called to the Court of Theodoric III of Neustria and from there was elevated to the episcopacy of Sens, 684 (690, 692). He was present at an assembly of bishops in 693 at Valenciennes. Two years later he resigned and retired to the Abbey of Fontanelle. During the second journey of St. Boniface to Rome Wulfram is said to have preached in Frisia. He tried to convert Radbod, but not succeeding he returned to Fontanelle. Some authorities record another and longer stay in Frisia, but, as neither Bede nor Alcuin mention his missionary labour there, it is barely possible. The relics of the saint were brought to Notre Dame at Abbeville in 1058. His feast is celebrated 20 March.