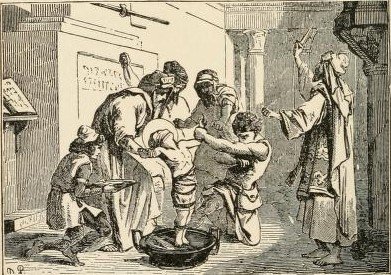 “HAIL, flowers of the martyrs!” the Church sings in her Office of the Holy Innocents, who were the first to die for Christ; and in every age mere children and infants have gloriously confessed His name. In 1472 the Jews in the city of Trent determined to vent their hate against the Crucified by slaying a Christian child at the coming Passover; and Tobias, one of their number, was deputed to entrap a victim. He found a bright, smiling boy named Simon playing outside his home, with no one guarding him. Tobias patted the little fellow’s cheek, and coaxed him to take his hand. The boy, who was not two years old, did so; but he began to call and cry for his mother when he found himself being led from home. Then Tobias gave him a bright coin to look at, and with many kind caresses silenced his grief, and conducted him securely to his house. At midnight on Holy Thursday the work of butchery began. Having gagged his mouth, they held his arms in the form of a cross, while they pierced his tender body with awls and bodkins in blasphemous mockery of the sufferings of Jesus Christ. After an hour’s torture the little martyr lifted his eyes to heaven and gave up his innocent soul. The Jews cast his body into the river; but their crime was discovered and punished, while the holy relics were enshrined in St. Peter’s Church at Trent, where they have worked many miracles.

WILLIAM OF NORWICH is another of these children martyrs. His parents were simple country folk, but his mother was taught by a vision to expect a Saint in her son. As a boy be fasted thrice a week and prayed constantly, and he was only an apprentice twelve years of age, at a tanner’s in Norwich, when he won his crown. A little before Easter, 1137, he was enticed into a Jew’s house, and was there gagged, bound, and crucified in hatred of Christ. Five years passed before the body was found, when it was buried as a saintly relic in the cathedral churchyard. A rose-tree planted hard by flowered miraculously in midwinter, and many sick persons were healed at his shrine.

Reflection.—Learn from the infant martyrs that, however weak you may be, you still can suffer for Christ’s sake.