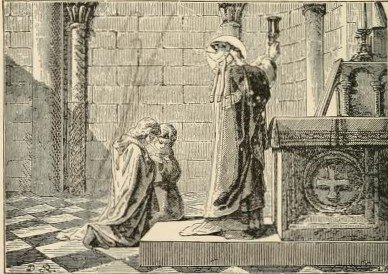 ST. LUDGER was born in Friesland about the year 743. His father, a nobleman of the first rank, at the child’s own request, committed him very young to the care of St. Gregory, the disciple of St. Boniface, and his successors in the government of the see of Utrecht. Gregory educated him in his monastery and gave him the clerical tonsure. Ludger, desirous of further improvement, passed over into England, and spent four years and a half under Alcuin, who was rector of a famous school at York. In 773 he returned home, and St. Gregory dying in 776, his successor, Alberic, compelled our Saint to receive the holy order of priesthood, and employed him for several years in preaching the Word of God in Friesland, where he converted great numbers, founded several monasteries, and built many churches. The pagan Saxons ravaging the country, Ludger travelled to Rome to consult Pope Adrian II, what course to take, and what he thought God required of him. He then retired for three years and a half to Monte Casino, where he wore the habit of the Order and conformed to the practice of the rule during his stay, but made no religious vows. In 787, Charlemagne overcame the Saxons and conquered Friesland and the coast of the Germanic Ocean as far as Denmark. Ludger, hearing this, returned into East Friesland, where he converted the Saxons to the Faith, as he also did the province of Westphalia. He founded the monastery of Werden, twenty-nine miles from Cologne. In 802, Hildebald, Archbishop of Cologne, not regarding his strenuous resistance, ordained him Bishop of Munster. He joined in his diocese five cantons of Friesland which he had converted, and also founded the monastery of Helmstad in the duchy of Brunswick.

Being accused to the Emperor Charlemagne of wasting his income and neglecting the embellishment of churches, this prince ordered him to appear at court. The morning after his arrival the emperor’s chamberlain brought him word that his attendance was required. The Saint, being then at his prayers, told the officer that he would follow him as soon as he had finished them. He was sent for three several times before he was ready, which the courtiers represented as a contempt of his Majesty, and the emperor, with some emotion, asked him why he had made him wait so long, though he had sent for him so often. The bishop answered that though he had the most profound respect for his Majesty, yet God was infinitely above him; that whilst we are occupied with Him, it is our duty to forget everything else. This answer made such an impression on the emperor that he dismissed him with honor and disgraced his accusers. St. Ludger was favored with the gifts of miracles and prophecy. His last sickness, though violent, did not hinder him from continuing his functions to the very last day of his life, which was Passion Sunday, on which day he preached very early in the morning, said Mass towards nine, and preached again before night, foretelling to those that were about him that he should die the following night, and fixing upon – place in his monastery of Werden where he chose to be interred. He died accordingly on the 26th of March, at midnight.

Reflection.—Prayer is an action so sublime and supernatural that the Church in her Canonical Hours teaches us to begin it by a fervent petition of grace to perform it well. What an insolence and mockery is it to join with this petition an open disrespect and a neglect of all necessary precautions against distractions! We ought never to appear before God, to tender Him our homages or supplications, without trembling, and without being deaf to all creatures and shutting all our senses to every object that can distract our minds from God.

Missionary among the Frisians and Saxons, first Bishop of Munster in Westphalia, born at Zuilen near Utrecht about 744; died 26 March, 809. Feast, 26 March. Represented as a bishop reciting his Breviary, or with a swan at either side. His parents, Thiadgrim and Liafburg, were wealthy Frisians of noble lineage. In 753 Ludger saw the great apostle of Germany, St. Boniface, and this sight and the subsequent martyrdom of the saint made deep impressions on his youthful mind. At his urgent request he was sent to the school which St. Gregory [of Utrecht, Abbot (c. 707-c. 775)] had founded at Utrecht, and made good progress. In 767 Gregory, who did not wish to receive episcopal consecration himself, sent Alubert, who had come from England to assist him in his missionary work, to York to be consecrated bishop. Ludger accompanied him to receive deaconship and to study under Alcuin, but after a year returned to Utrecht. Some time later he was granted an opportunity to continue his studies in the same school, and here contracted a friendship with Alcuin which lasted throughout life. In 773 a friction arose between the Anglo-Saxons and the Frisians, and Ludger, to provide for his personal safety, left for home, taking with him a number of valuable books. In 775 he was sent to Deventer to restore the chapel destroyed by the heathen Saxons and to find the relics of St. Lebwin (Liafwin), who had laboured there as missionary, had built the chapel, and had died there. Ludger was successful in his undertaking, and then taught in the school of Utrecht. He and some others were next sent north to destroy the heathen places of worship west of the Lauwers Zee.

After Ludger had been ordained at Cologne in 777 the missions of Ostergau (Ostracha, i.e., Eastern Friesland) were committed to his charge, and Dokkum, the place of the martyrdom of St. Boniface, was made the centre. During each autumn he came to Utrecht to teach at the cathedral school. In this manner he toiled for about seven years, until Widukind, the indomitable leader of the Saxons, induced the Frisians to drive out the missionaries, burn the churches, and return to the heathen gods. Ludger escaped with his disciples. In 785 he visited Rome, was well received by Pope Adrian, and obtained from him good counsel and special faculties. From Rome he went to Monte Cassino, where he lived according to the Rule of St. Benedict, but did not bind himself by vows. The news of Widukind’s submission, and the arrival of Charlemagne at Monte Cassino in 787, put an end to Ludger’s peaceful retirement. He was appointed missionary to the five districts at the mouth of the Ems, which was still occupied almost entirely by heathens. With his usual energy and unbounded confidence in God he began his work; and, knowing the language and habits of the people, he was able to turn to advantage many national traits in effecting their conversion. His zeal knew no bounds; the island of Bant, long since swallowed by the sea, is mentioned as the scene of his apostolic work. He visited Heligoland (Fossitesland), where St. Willibrord had preached; he destroyed the remaining vestiges of heathenism, and built a Christian temple. The well once sacred to the heathen gods became his baptismal font. On his return he met the blind bard Berulef, cured his blindness, and made him a devout Christian.

In 793 (Hist. Jahrb., I, 282) Charlemagne wished to make Ludger Bishop of Trier, but he declined the honour, while declaring himself willing to undertake the evangelizing of the Saxons. Charlemagne gladly accepted the offer, and North-western Saxony was thus added to Ludger’s missionary field. To defray necessary expenses the income of the Abbey of Leuze, in the present Belgian Province of Hainaut, was given him, and he was told to pick his fellow-labourers from the members of that abbey. As Mimigernaford (Mimigardeford, Miningarvard) had been designated the centre of the new district, Ludger built a monastery (monasterium) there, from which the place took its name Munster. Here he lived with his monks according to the rule of St. Chrodegang of Metz, which in 789 had been made obligatory in the Frankish territories (Schmitz Kallenberg, “Monasticon Westphaliae”, Munster, 1909, p. 62, places the date of foundation between 805 and 809). He also built a chapel on the left of the Aa in honour of the Blessed Virgin, besides the churches of Billerbeck, Coesfeld, Herzfeld, Nottuln, and others. Near the church of Nottuln he built a home for his sister, St. Gerburgis, who had consecrated herself to God. Many pious virgins soon gathered about her, and so arose the first convent in Westphalia (c. 803). At the request of Charlemagne, Ludger received episcopal consecration some time between 13 Jan., 802, and 23 April, 805, for on the first date he is still styled abbot, while on the latter he is called bishop (Hist. Jahrb., I, 283). His principal care was to have a good and efficient clergy. He, to a great extent, educated his students personally, and generally took some of them on his missionary tours. Since his sojourn at Monte Cassino Ludger had entertained the idea of founding a Benedictine monastery. During the past years he had been acquiring property and looking for a suitable location. At length he decided upon Werden; but it was only in 799 that building began in earnest, and in 804 that he consecrated the church.

On Passion Sunday, 809, Ludger heard Mass at Coesfeld early in the morning and preached, then went to Billerbeck, where at nine o’clock he again preached, and said his last Mass. That evening he expired peacefully amidst his faithful followers. A dispute arose between Munster and Werden for the possession of his body. His brother Hildegrim being appealed to, after consultation with the emperor, decided in favour of Werden, and here the relics have rested for eleven centuries. Portions have been brought to Munster and Billerbeck. From 22 June to 4 July, 1909, the Diocese of Munster celebrated the eleventh centenary. “Bishop Hermann Dingelstad, the present successor of the apostle, celebrated the Jubilee, uniting it with the golden jubilee of his own priesthood. A most touching scene was witnessed when thousands of men, who had come from far and near, after a stirring sermon of the orator-bishop of Treves, Mgr Felix Korum, renewed their baptismal vows at the same well from which St. Ludgerus had baptized their forefathers. A Benedictine abbot and eleven bishops, among them the archbishop of the saint’s Frisian home, Utrecht, and Cardinal Fischer of Cologne, took part in the sacred celebrations” (“America”, I, 381).