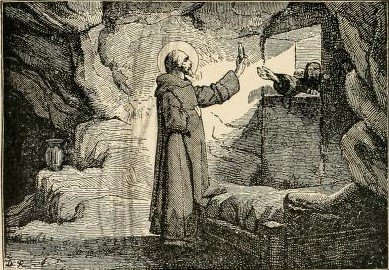 TILL he was twenty-five, John worked as a carpenter with his father. Then feeling a call from God, he left the world and committed himself to a holy solitary in the desert. His master tried his spirit by many unreasonable commands, bidding him roll the hard rocks, tend dead trees, and the like. John obeyed in all things with the simplicity of a child. After a careful training of sixteen years he withdrew to the top of a steep cliff to think only of God and his soul. The more he knew of himself, the more he distrusted himself. For the last fifty years, therefore, he never saw women, and seldom men. The result of this vigilance and purity was threefold: a holy joy and cheerfulness which consoled all who conversed with him; perfect obedience to superiors; and, in return for this, authority over creatures, whom he had forsaken for the Creator. St. Augustine tells us of his appearing in a vision to a holy woman, whose sight he had restored, to avoid seeing her face to face. Devils assailed him continually, but John never ceased his prayer. From his long communings with God, he turned to men with gifts of healing and prophecy. Twice each week he spoke through a window with those who came to him, blessing oil for their sick and predicting things to come. A deacon came to him in disguise, and he reverently kissed his hand. To the Emperor Theodosius he foretold his future victories and the time of his death. The three last days of his life John gave wholly to God: on the third he was found on his knees as if in prayer, bud his soul was with the blessed. He died in 394.

Reflection.—The Saints examine themselves by the perfections of God, and do penance. We judge our conduct by the standard of other men, and rest satisfied with it. Yet it is by the divine holiness alone that we shall be judged when we die.