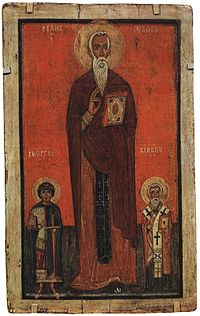 Thirteenth century icon of St. John Climacus; to either side are Saint George and Saint Blaise

Also known as John of the Ladder, John Scholasticus, and John Sinaites

JOHN made, while still young, such progress in learning that he was called the Scholastic. At the age of sixteen he turned from the brilliant future which lay before him, and retired to Mt. Sinai, where he put himself under the direction of a holy monk. Never was novice more fervent, more unrelaxing in his efforts for self-mastery. After four years he took the vows, and an aged abbot foretold that he would some day be one of the greatest lights of the Church. Nineteen years later, on the death of his director, he withdrew into a deeper solitude, where he studied the lives and writings of the Saints, and was raised to an unusual height of contemplation. The fame of his holiness and practical wisdom drew crowds around him for advice and consolation. For his greater profit he visited the solitudes of Egypt. At the age of seventy-five he was chosen abbot of Mt. Sinai, and there “he dwelt in the mount of God, and drew from the rich treasure of his heart priceless riches of doctrine, which he poured forth with wondrous abundance and benediction.” He was induced by a brother abbot to write the rules by which he had guided his life; and his book called the Climax, or Ladder of Perfection, has been prized in all ages for its wisdom, its clearness, and its unction. At the end of four years he would no longer endure the honors and distractions of his office, and retired to his solitude, where he died, in 605.

Reflection.—“Cast not from thee, my brother,” says the Imitation of Christ,” the sure hope of attaining to the spiritual life; still hast thou the time and the means.”

Also surnamed SCHOLASTICUS, and THE SINAITA, born doubtlessly in Syria, about 525; died on Mount Sinai. 30 March, probably in 606, according the credited opinion — others say 605. Although his education and learning fitted him to live in an intellectual environment, he chose, while still young, to abandon the world for a life of solitude. The region of Mount Sanai was then celebrated for the holiness of the monks who inhabited it; he betook himself thither and trained himself to the practice of the Christian virtues under the direction of a monk named Martyrius. After the death of Martyrius John, wishing to practise greater mortifications, withdrew to a hermitage at the foot of the mountain. In this isolation he lived for some twenty years, constantly studying the lives of the saints and thus becoming one of the most learned doctors of the Church.

In 600, when he was about seventy-five years of age, the monks of Sinai persuaded him to put himself at their head. He acquitted himself of his functions as abbot with the greatest wisdom, and his reputation spread so far that the pope (St. Gregory the Great) wrote to recommend himself to his prayers, and sent him a sum of money for the hospital of Sinai, in which the pilgrims were wont to lodge. Four years later he resigned his charge and returned to his hermitage to prepare for death.

St. John Climacus has left us two important works: the “Scala [Klimax] Paradisi”, from which his surname comes, composed at the request of John, Abbot of Raithu, a monastery situated on the shores of the Red Sea; and the “Liber ad Pastorem”. The “Scala”, which obtained an immense popularity and has made its author famous in the Church, is addressed to anchorites and cenobites, and treats of the means by which the highest degree of religious perfection may be attained. Divided into thirty parts, or “steps”, in memory of the thirty years of the hidden life of Christ, the Divine model of the religious, it presents a picture of all the virtues and contains a. great many parables and historical touches, drawn principally from the monastic life, and exhibiting the practical application of the precepts. At the same time, as the work is mostly written in a concise, sententious form, with the aid of aphorisms, and as the reasonings are not sufficiently closely connected, it is at times somewhat obscure. This explains its having been the subject of various commentaries, even in very early’ times. The most ancient of the manuscripts containing the “Scala” is found in the Bibliothèque Nationale in Paris, and was probably brought from Florence by Catharine de’ Medici. In some of these manuscripts the work bears the title of “Spiritual Tables” (Plakes pneumatikai). It was translated into Latin by Ambrogio the Camaldolese (Ambrosius Camaldulensis) (Venice, 1531 and 1569; Cologne, 1583, 1593, with a commentary by Denis the Carthusian; and 1601, 8vo). The Greek of the “Scala”, with the scholia of Elias, Archbishop of Crete, and also the text of the “Liber ad Pastoem”, were published by Matthæus Raderus with a Latin translation (fol., Paris, 1633). The whole is reproduced in P.G., LXXXVIII (Paris, 1860), 5791248. Translations of the “Scala” have been published in Spanish by Louis of Granada (Salamanca, 1551), in Italian (Venice, 1585), in modern Greek by Maximus Margunius, Bishop of Cerigo (Venice, 1590), and in French by Arnauld d’Andilly (12mo, Paris, 1688). The last-named of these translations is preceded by a life of the saint by Le Maistre de Sacy. There is also in existence an ancient life of the saint by a monk named Daniel.