Octave of Birth of Our Lord Jesus Christ 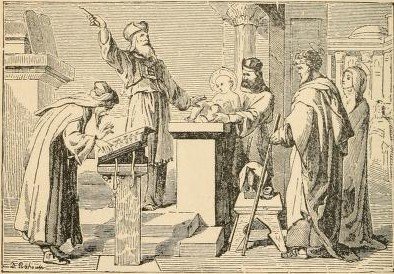 CIRCUMSISION was a sacrament of the Old Law, and the first legal observance required by Almighty God of the descendants of Abraham. It was a sacrament of initiation in the service of God, and a promise and engagement to believe and act as He had revealed and directed. The law of circumcision continued in force until the death of Christ, and Our Saviour being born under the law, it became Him, Who came to teach mankind obedience to the law of God, to fulfil all justice, and to submit to it. Therefore He was circumcised that He might redeem them that were under the law, by freeing them from the servitude of it; and that those who were in the condition of servants before might be set at liberty, and receive the adoption of sons in Baptism, which, by Christ’s institution, succeeded to circumcision. On the day that the divine Infant was circumcised, He received the name of Jesus, which signifies SAVIOUR, which had been given Him by the angel before He was conceived. That name, so beautiful, so glorious, the divine Child does not wish to bear for one moment without fulfilling its meaning; even at the moment of His circumcision He showed Himself a SAVIOUR by shedding for us that blood a single drop of which is more than sufficient for the ransom and salvation of the whole world.

Reflection.—Let us profit by the circumstance of the new year, and of the wonderful renewal wrought in the world by the great mystery of this day, to renew in our hearts an increase of fervor and of generosity in the service of God. May this year be one of fervor and of progress! It will go by rapidly, like that which has just ended. If God permits us to see its end, how glad and happy we shall be to have passed it holily!

From Butler’s Lives of the Saints, by Alban Butler, Bezinger Bros. Edition [1894]

CIRCUMCISION was a sacrament of the Old Law, and the first legal observance required by Almighty God of that people which He had chosen preferably to all the nations of the earth to be the depositary of His revealed truths. These were the descendants of Abraham, upon whom He had enjoined it several hundred years before the giving of the law to Moses on Mount Sinai. And this on two accounts: First, as a distinguishing mark between them and the rest of mankind. Secondly, as a seal to a covenant between God and that patriarch: whereby it was stipulated on God’s part to bless Abraham and his posterity; whilst on their part it implied a holy engagement to be His people, by a strict confonnity to His laws. It was therefore a sacrament of initiation in the service of God, and a promise and engagement to believe and act as He had revealed and directed.

This law of circumcision continued in force till the death of Christ: hence, our Saviour being born under the law, it became Him, who came to teach mankind obedience to the laws of God, to fulfil all justice and to submit to it. Therefore, He was “made under the law” — that is, was circumcised — that He might redeem them that were under the law, by freeing them from the servitude of it: and that those who were in the condition of servants before might be set at liberty, and receive the adoption of sons in baptism, which by Christ’s institution succeeded to circumcision. On the day He was circumcised He received the name of JESUS, the same which had been appointed Him by the angel before He was conceived. The reason of His being called Jesus is mentioned in the gospel: “For He shall save His people from their sins.” This He effected by the greatest sufferings and humiliations, humbling Himself, as St Paul says, not only unto death, but even to the death of the cross; for which cause God hath exalted Him, and hath given Him a name which is above all names, that at the name of JESUS every knee shall bow; agreeably to what Christ says of Himself, ” All power is given unto Me in heaven and in earth “.

Considered liturgically, three, if not four, distinct elements may be recognized in the festival which the Church keeps on the first day of each year. It is, to begin with, the octave of Christmas, and — possibly as a consequence of this — a special commemoration is made of the Virgin Mother whose pre-eminent share in the mystery could not adequately be recognized on the feast itself. Secondly, our ancient mass-books and other documents preserve many traces of the observance of the day in a spirit of penance, seemingly to protest against and atone for the debaucheries and other excesses customary among pagans at the outset of the new year. Thirdly, the eighth day after birth was the day when our Infant Saviour was circumcised, an incident pregnant with significance which called for suitable celebration on its own account.

So far as our liturgical evidence goes the earliest recognition of the feast is to be found in the Lectionary of Victor of Capua. This, which bears witness to the usage of southern Italy in the year 546, has an entry De circumcisione Domini,  and indicates as a reading for that day the passage from St Paul to the Romans (xv. 4-14) in which our Lord is spoken of as “Minister of the circumcision for the truth of God to confirm the promises made to the fathers”. Only a very little later we find in the 17th canon of the second Council of Tours (A.D. 567) a statement that from Christmas to the Epiphany each day was treated as a feast except that triduum (apparently from January I to January 3) “duringwhich our fathers, to stamp out the custom of the pagans, imposed a private celebration of litanies on the first of January, in order that psalmody might be carried on in the churches, and that on the day itself Mass of the Circumcision might be offered to God at the eighth hour”. Here, besides the reference to the Mass of the Circumcision, all the associations of the word litaniae were distinctly connected by the usage of the times with penitential practices. Further, in the archetype of the martyrology known as the Hieronymianum, which dates from about the year 600, the Circumcision is again mentioned, and this is also the case with the majority of the calendars, martyrologies, lectionaries and other service-books of the seventh and following centuries. Although in the present Roman liturgy no trace remains of the early efforts made to wean Christian converts from taking part in the pagan idolatries and debaucheries which ushered in the new year, still the so-called “Gelasian” sacramentaries, more or less modified by the uses which prevailed in Gaul, Germany, and Spain, constantly provide a second Mass for this day which is headed “ad prohibendum ab idolis” — i.e. against idolatrous practices. In this Mass all the prayers echoed the petition that those who had been brought to the pure worship of the Christian faith might have the courage utterly to turn their backs upon the old, profane and evil ways of paganism. It is to be noted that even before any special church celebration can be connected with new year’s day, we find St Augustine, in a sermon preached on that morning, exhorting his hearers to behave as Christians amid the excesses of their gentile neighbours at that season.

It is certain, then, that a wish to rescue the weaker members of the Christian community from the contamination of the new-year celebrations played a great part in the institution of a church festival on that day. St Augustine’s words suggest that he realized how hopeless it was to impose a general fast upon an occasion which was a holiday for the rest of the world. Ordinary human nature would have rebelled if too much had been exacted of it. All that could be done in practice was to carry out the principles enunciated by such wise pastors as St Gregory Thaumaturgus and St Gregory the Great, that when pagan observances were ineradicably fixed in the customs of a people, the evil must be neutralized by establishing a Christian celebration in place of the heathen one. On the whole it would seem that outside Rome — in Gaul, Germany, Spain, and even at Milan and in the south of Italy — an effort was made to exalt the mystery of the Circumcision in the hope that it might fill the popular mind and win the revellers from their pagan superstitions. In Rome itself, however, there is no trace of any reference to the Circumcision until a relatively late period. What our actual missal preserves for us, even down to the present day, is a liturgy which, while echoing, as the octave naturally would, the sentiments proper to Christmas, refers in a very marked way to the Mother of God, e.g. in the collect for the feast. How comes it that our Lady is thus appealed to on the first day of the year? This may, as mentioned above, be simply the result of her intimate connection with the mystery of the Incarnation, but there is some evidence that the liturgy for to-day represents the service for the octave of Christmas as solemnized in the ancient Roman basilica of our Lady, Old St Mary’s (cf. D. Bünner in the bibliography). But whether or not a feast of special solemnity was observed on January 1 in this ancient church to serve as an antidote to pagan licence, it is unfortunately certain that the expedient was only partially successful, and that the riotous excesses of the season still survived in the “Feast of Fools” and other abuses, against which the better sort of ecclesiastics protested throughout the middle ages, but often protested in vain.

See Abbot Cabrol, Les origines liturgiques (1906), pp. 203-210; also in the Revue du clergé français, January, 1906, pp. 262 seq., and in DAC., S.v. “Circoncision”; F. Bünger, Geschichte der Neujahrsfeier in der Kirche (1909); D. Bünner, “La fête ancienne de la Circoncision “, in La Vie et les Arts Liturgiques, January, 1924; G. Morin in Anecdota Maredsolana, vol. i, pp. 426-428. See also Mansi, Concilia, vol. ix, p. 796; Maasen, Concilia Merov., p. 126; St Augustine, sermon 198 in Migne, PL., vol. xxxviii, c. 1025 ; and W. de Grüneisen, Ste Marie Antique, pp. 94, 493. There occurs above a reference to the Hieronymianum, which will be frequently mentioned in these notes. The “Martyrology of Jerome”, so called because it was erroneously attributed to St Jerome, was the foundation of all similar Western calendars of martyrs and other saints. It was compiled in Italy during the second half of the fifth century: the archetype on which all existing manuscripts of it are based is a recension made in Gaul about the year 600. Father Delehaye’s Commentary on the Hieronymianum (CMH) is printed in the Acta Sanctorum, November, vol. ii, part 2.