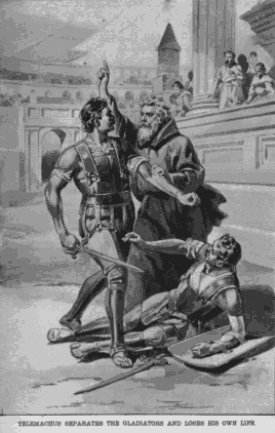 St. Almachius, or Telemachus, from Foxe’s Book of Martyrs
Text on image as it appears: “Telemachus separates the gladiators and loses his own life.”

A LL that we know of this interesting martyr is derived from two brief notices, the one contained in the Ecclesiastical History of Theodoret (bk v, c. 26), the other in the ancient “Martyrology of Jerome” referred to in the note above. In the first we read that the Emperor Honorius abolished the gladiatorial combats of the arena in consequence of the following incident: “An ascetic named Telemachus had come from the East to Rome animated with a holy purpose. Whilst the abominable games were in progress he entered the stadium and, going down into the arena, attempted to separate the combatants. The spectators of this cruel pastime were infuriated, and at the instigation of Satan, who delights in blood, they stoned to death the messenger of peace. On hearing what had happened the excellent emperor had him enrolled in the glorious company of martyrs, and put an end to these criminal sports.”
In the Hieronymianum the notice, preserved to the present day in the Roman Martyrology, reads: “January 1st … the feast of Almachius, who, when he said , ‘To-day is the octave day of the Lord, cease from the superstitions of idols and fr0m polluted sacrifices’, was slain by gladiators at the command of Alipius, prefect of the city.” As against Dom Germain Morin, who is inclined to regard this alleged martyrdom as only an echo of the fantastic legend of the dragon of the Roman Forum, Father H. Delehaye, the Bollandist, believes the incident to be historical, and, in spite of certain difficulties, considers that the martyr’s name was really Almachius, and that he perished about A.D. 400.

Saint Almachius, pray for us.