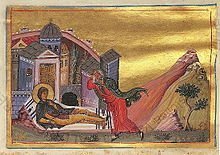 A dying Euphrosyne reveals herself to her father, miniature from the Menologion of Basil II

THE Greeks call St Euphrosyne “Our Mother”, and pay her great honour, but we have no authentic accounts of her life. Her so-called history is nothing but a replica of the story of St. Pelagia, as narrated for Western readers in the Vitae Patrum or in the Golden Legend, a tale which struck the popular fancy and which, with slight variations, was adapted as an embellishment to the lives of St. Marina, St. Apollinaris, St. Theodora, etc.
According to this fiction, St. Euphrosyne was the daughter of Paphnutius, a pious and wealthy citizen of Alexandria. He and his wife had long been childless, but Euphrosyne was born to them in answer to the prayers of a holy monk whose intercession they had sought. The little girl was fascinating and marvellously beautiful, and because of the joy she caused to her parents they named her Euphrosyne. When she was eleven, her mother died. Her father set about finding her a husband and affianced her to a young man of great wealth. At first she does not seem to have objected, but after an interview with the old monk who had prayed for her before her birth, she began to feel the call to a higher life and ceased to care for the things of this world. She tore off her jewellery and gave it away to the poor, she avoided young people of her own age, consorting only with pious, elderly women, and, in order to make herself less attractive, we are told that she ceased washing her face “even with cold water”. All this seems to have Made no impression on her father, who went off to a three days’ retreat in honour of the holy founder of a monastery of which he was a benefactor. As soon as he was gone, Euphrosyne sent a servant she could trust to ask for an interview with the old monk. She told him how she felt, and he replied that our Lord had said that if anyone would not leave father, mother, brothers and everything for the kingdom of Heaven’s sake, he could not be His disciple. She then confessed that she feared to anger her father, as she was the only heir to his property. The monk answered that her father could find as many heirs as he wanted among the poor and the sick. Finally she asked him to give her the veil—which he did then and there.
When the interview was over, and Euphrosyne began to think matters out, she came to the conclusion that she could not count upon being safe from her father in any nunnery in that country, for he would be sure to find her and carry her off by force. She therefore secretly changed into man’s attire and slipped out of the house by night—her father being still away. She found her way to the very monastery her father frequented, and asked for the superior, who was surprised to see this exceptionally beautiful youth. Euphrosyne told him that her name was Smaragdus, that she had heen attached to the court but had fled from the distractions of the city and the intrigues of the courtiers, and that she now desired to spend her life in peace and prayer. The abbot was greatly edified and offered to receive her if she would submit to the direction of an elder to teach her the discipline of the religious life—she heing evidently quite inexperienced. She replied that, far from objecting to one, she would welcome many masters to teach her the way of perfection. No one ever suspected her sex, and she soon gave proof of extraordinary progress in virtue. She had many trials and temptations, hut she overcame them all. Because her beauty and charm were a cause of distraction to the other monks, she retired to a solitary cell where she saw only those who desired her advice. Her fame for holiness and wisdom spread far and wide, and after a time her father, in his despair at losing her, asked leave to consult this venerated ascetic, Smaragdus. She recognized him, but he did not know her, since her face was alrnost hidden and she was much changed by her austerities. She gave him spiritual consolation, but did not make herself known to him till she was on her death-bed many years later. After her death, her father Paphnutius retired from the world and inhabited her cell for ten years.

Died about 470. Her story belongs to that group of legends which relate how Christian virgins, in order the more successfully to lead the life of celibacy and asceticism to which they had dedicated themselves, put on male attire and passed for men. According to the narrative of her life in the “Vitæ Patrum”, Euphrosyne was the only daughter of Paphnutius, a rich man of Alexandria, who desired to marry her to a wealthy youth. But having consecrated her life to God and apparently seeing no other means of keeping this vow, she clothed herself as a man and under the name of Smaragdus gained admittance into a monastery of men near Alexandria, where she lived for thirty-eight years after. She soon attracted the attention of the abbot by the rapid strides which she made toward a perfect ascetic life, and when Paphnutius appealed to him for comfort in his sorrow, the abbot committed the latter to the care of the alleged young man Smaragdus. The father received from his own daughter, whom he failed to recognize, helpful advice and comforting exhortation. Not until she was dying did she reveal herself to him as his lost daughter Euphrosyne. After her death Paphnutius also entered the monastery. Her feast is celebrated in the Greek Church on 25 September, in the Roman Church on 16 January (by the Carmelites on 11 February).

Saint Euphrosyne, pray for us.