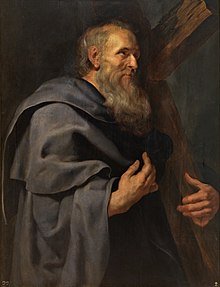 ST. PHILIP was of Bethsaida, in Galilee, and called by our Saviour is follow him the day after St. Peter and St. Andrew. He was at that time a married man, and had several daughters; but his being engaged in the married state hindered him not, as St. Chrysostom observes, from meditating continually on the law and the prophets, which disposed him for the important discovery of the Messiah in the person of Jesus Christ, in obedience to whose command he forsook all to follow him, and became thenceforth the inseparable companion of his ministry and labors. Philip had no sooner discovered the Messiah, than he was desirous to make his friend Nathaniel a sharer in his happiness, saying to him: We have found him of whom Moses in the law and the prophets did write, that is, the Messiah; Jesus, the son of Joseph, of Nazareth. Nathaniel was not so ready to give his assent to this assertion of his friend, by reason that the supposed Messiah was reported to be of Nazareth. Philip therefore desired him to come himself to Jesus and see; not doubting but, upon his personal acquaintance with the Son of God, he would be as much convinced of the truth as he was himself. Nathaniel complied, and Jesus, seeing him approach, said, within his hearing: Behold an Israelite indeed, in whom there is no guile. Nathaniel asked him, how he came to know him: Jesus replied: Before Philip called thee, when thou wast under the fig-tree, I saw thee. Nathaniel, as two holy fathers explain the matter, calling to mind that the closeness of his retirement on that occasion was such, that no human creature could see him, owned him hereupon for the Son of God,and the King of Israel, or, in other words, the Messiah, foretold by Moses and the prophets.

The marriage at Cana of Galilee happening three days after, to which Jesus and his disciples were invited, St. Philip was present at it with the rest. The year following, when our Lord formed the college of apostles, Philip was appointed one of that number, and, from the several passages of the gospel, he appears to have been particularly dear to his divine Master. Thus, when Jesus was about to feed five thousand persons, who had followed him into the wilderness, for the greater evidence of the miracle, and for the trial of this apostle’s faith, Jesus proposed to him the difficulty of feeding the multitudes in that desolate place.2 And a little before our Saviour’s passion, certain Gentiles, desirous to see Christ, made their first address to Philip, and by him and St. Andrew obtained that favor. Our Saviour, in the discourse he made to his disciples immediately after his last supper, having promised them a more clear and perfect knowledge of his heavenly Father than they had had hitherto, St. Philip cried out, with a holy eagerness and impatience: Lord, show us the Father, and it sufficeth us. From which words our Saviour took occasion to inculcate afresh a steady belief of his divinity, and perfect equality with the Father, saying So long a time have I been with you, (teaching you who I am both by my words and actions,) and have you not known me? (If you beheld me with the eyes of faith such as I really am, in seeing me you would see the Father also, because) I am in the Father, and the Father is in me.

After our Lord’s ascension the gospel was to be preached to the whole world by a few persons, who had been eye-witnesses of his miracles, and were enabled, by the power of the Holy Ghost, to confirm their testimony concerning him by doing the like wonderful works themselves. That this might be accomplished, it was necessary that the disciples should quickly disperse themselves into all parts of the world. St. Philip accordingly preached the gospel in the two Phrygias, as Theodoret and Eusebius assure us from undoubted monuments. St. Polycarp, who was only converted in the year 80, enjoyed his conversation for some time, consequently St. Philip must have lived to a very advanced age. It appears, from a passage of Polycrates, quoted by Eusebius, that he was buried at Hierapolis, in Phrygia, which city was indebted to his relics for its preservation by continual miracles, as is averred by the author of the sermon on the twelve apostles, attributed to St. Chrysostom. An arm of St. Philip was brought from Constantinople to Florence, in 1204, whereof we have an authentic history in the Bollandists. The Orientals keep his festival on the 14th of November; the Latins on the 1st of May, with St. James. His body is said to be in the church of SS. Philip and James, in Rome, which was dedicated to God under their name, in 560. The emperor Theodosius, in a vision, received from St. John the Evangelist, and St. Philip, the assurance of victory over the tyrant Eugenius, the morning before the battle, in 394, as Theodoret relates.

From St. Philip we must particularly learn an ardent love of God, and desire to see the Father. He asked only this favor, because this was his only desire. Is it ours? Do we feel it so perfect as to extinguish all inordinate earthly affections and desires in our breasts? Do we employ the proper means to attain to this happy disposition? To obtain it, let us employ the succor of this apostle’s prayers, and by disengaging our hearts from corruption and vanity, become, in desires and affections, citizens of heaven. The pilgrim soul sees herself a stranger here on earth, and discovers nothing in this desert place of her banishment hut an abyss of vanity, and subjects of compunction, grief, and fears. On the other side, looking up to God, she contemplates the magnificence and splendor of his kingdom, which will have no end; its peace, security, sanctity without stain, delights without sorrow, unchangeable and incomprehensible joys; and she cries out in a holy transport: “O joy surpassing all joys, and without which there is no true joys, when shall I possess you? O, sovereign good, discover to me some ray of thy beauty and of thy glory; may my heart be set on flame by thy love, and my soul languish and waste with desire to be united to thee, to behold thee face to face, to sing thy praises night and day, to drink of the plenty of thy house, and of the torrent of thy delights, to be forever confirmed in thy love, and in some measure transformed into thee!” Such a soul seeks to hide herself from the eyes of men, to live unknown to the world; and, in retirement and repose, to apply herself to prayer, all her thoughts being taken up in contemplating the glorious things which are said of the blessed city of her God. All worldly enjoyments and distractions are insupportable to her, and she finds no comfort in this place of banishment but in singing the praises of her God, in adoring and in doing always his will, and in the sweet sighs and tears with which she seeks him, and begs him to reign perfectly in her affections by his grace and love, and to draw her speedily to himself out of this Babylon, in which every object increases her affliction, and inflames her desire, seeming to say to her: Where is thy God?

Source: The Lives of the Fathers, Martyrs, and other Principal Saints, by Alban Butler, from ecatholic2000.com

Like the brothers, Peter and Andrew, Philip was a native of Bethsaida on Lake Genesareth (John 1:44). He also was among those surrounding the Baptist when the latter first pointed out Jesus as the Lamb of God. On the day after Peter’s call, when about to set out for Galilee, Jesus met Philip and called him to the Apostolate with the words, “Follow me”. Philip obeyed the call, and a little later brought Nathaniel as a new disciple (John 1:43-45). On the occasion of the selection and sending out of the twelve, Philip is included among the Apostles proper. His name stands in the fifth place in the three lists (Matthew 10:2-4; Mark 3:14-19; Luke 6:13-16) after the two pairs of brothers, Peter and Andrew, James and John. The Fourth Gospel records three episodes concerning Philip which occurred during the epoch of the public teaching of the Saviour:

• Before the miraculous feeding of the multitude, Christ turns towards Philip with the question: “Whence shall we buy bread, that these may eat?” to which the Apostle answers: “Two hundred penny-worth of bread is not sufficient for them, that every one may take a little” (vi, 5-7).

• When some heathens in Jerusalem came to Philip and expressed their desire to see Jesus, Philip reported the fact to Andrew and then both brought the news to the Saviour (xii, 21-23).

• When Philip, after Christ had spoken to His Apostles of knowing and seeing the Father, said to Him: “Lord, shew us the Father, and it is enough for us”, he received the answer: “He that seeth me, seeth the Father also” (xiv, 8-9).

These three episodes furnish a consistent character-sketch of Philip as a naïve, somewhat shy, sober-minded man. No additional characteristics are given in the Gospels or the Acts although he is mentioned in the latter work (1:13) as belonging to the Apostolic College.

The second-century tradition concerning him is uncertain, inasmuch as a similar tradition is recorded concerning Philip the Deacon and Evangelist — a phenomenon which must be the result of confusion caused by the existence of the two Philips. In his letter to St. Victor, written about 189-98, bishop Polycrates of Ephesus mentions among the “great lights”, whom the Lord will seek on the “last day”, “Philip, one of the Twelve Apostles, who is buried in Hieropolis with his two daughters, who grew old as virgins”, and a third daughter, who “led a life in the Holy Ghost and rests in Ephesus.” On the other hand, according to the Dialogue of Caius, directed against a Montanist named Proclus, the latter declared that “there were four prophetesses, the daughters of Philip, at Hieropolis in Asia where their and their father’s grave is still situated.” The Acts (21:8-9) does indeed mention four prophetesses, the daughters of the deacon and “Evangelist” Philip, as then living in Caesarea with their father, and Eusebius who gives the above-mentioned excerpts (Church History III.32), refers Proclus’ statement to these latter. The statement of Bishop Polycrates carries in itself more authority, but it is extraordinary that three virgin daughters of the Apostle Philip (two buried in Hieropolis) should be mentioned, and that the deacon Philip should also have four daughters, said to have been buried in Hieropolis. Here also perhaps we must suppose a confusion of the two Philips to have taken place, although it is difficult to decide which of the two, the Apostle or the deacon, was buried in Hieropolis. Many modern historians believe that it was the deacon; it is, however, possible that the Apostle was buried there and that the deacon also lived and worked there and was there buried with three of his daughters and that the latter were afterwards erroneously regarded as the children of the Apostle. The apocryphal “Acts of Philip,” which are, however purely legendary and a tissue of fables, also refer Philip’s death to Hieropolis. The remains of the Philip who was interred in Hieropolis were later translated (as those of the Apostle) to Constantinople and thence to the church of the Dodici Apostoli in Rome. The feast of the Apostle is celebrated in the Roman Church on 1 May (together with that of James the Younger), and in the Greek Church on 14 November. [Editor’s Note: The feast is now celebrated on 3 May in the Roman Church.]