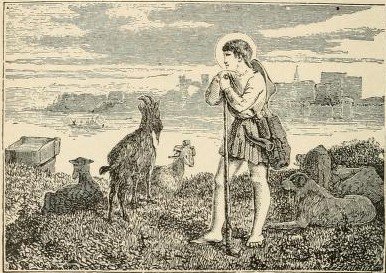 ST. BENEZET kept his mother’s sheep in the country, and as a mere child was devoted to practices of piety. As many persons were drowned in crossing the Rhone, Benezet was inspired by God to build a bridge over that rapid river at Avignon. He obtained the approbation of the bishop, proved his mission by miracles, and began the work in 1177, which he directed during seven years. He died when the difficulty of the undertaking was over, in 1184. This is attested by public monuments drawn up at that time and still preserved at Avignon, where the story is in everybody’s month. His body was buried upon the bridge itself, which was not completely finished till four years after his decease, the structure whereof was attended with miracles from the first laying of the foundations till it was completed in 1188. Other miracles wrought after this at his tomb induced the city to build a chapel upon the bridge, in which his body lay nearly five hundred years. But in 1669 a greater part of the bridge falling down through the impetuosity of the waters, the coffin was taken up, and being opened in 1670 in presence of the grand vicar, during the vacancy of the archiepiscopal see, the body was found entire, without the least sign of corruption; even the bowels were perfectly sound, and the color of the eyes lively and sprightly, though, through the dampness of the situation, the iron bars about the coffin were much damaged with rust. The body was found in the same condition by the Archbishop of Avignon in 1674, when, accompanied by the Bishop of Orange and a great concourse of nobility, he performed the translation of it, with great pomp, into the Church of the Celestines, this Order having obtained of Louis XIV. the honor of being intrusted with the custody of his relics till such time as the bridge and chapel should be rebuilt.

Reflection.—Let us pray for perseverance in good works. St. Augustine says, “When the Saints pray in the words which Christ taught, they ask for little else than the gift of perseverance.”